Readers — sbrksfhtha
This is a piece from Grandparents.com pleading with grandparents to listen to reason, hope, joy and the real numbers when it comes to the people they love most: Their grandkids. Some excerpts:

“Anything could have happened. There are predators out there. A school parking lot is the perfect place to pick up two kids, especially when you see them crying and scared.”

Thatâ€™s Nicole Rodgers, a Canadian mother whose children, 7-year-old Austin and 9-year-old Keirstin, werenâ€™t kidnapped, assaulted, or harmed in any way. Instead, the kids’ Red Cross swim program on Prince Edward IslandÂ dropped them off eight minutes early to the parking lot where they usually get picked upâ€”an infraction that merited a formal incident report, along withÂ national news coverage. “They could have been abducted,” Rodgers went on to say. “I might never have seen them again.”

The paranoia goes far beyond a few busybodies, too. Polls have shown thatÂ Americans areÂ moreÂ distrustfulÂ than everâ€”and that goes double when it comes to their children and grandchildren. “Today, a good parent imagines their child dead. Thatâ€™s whatâ€™s weâ€™ve been trained to do,” says Lenore Skenazy….

It turns out, that perpetual terror doesn’t do anyone any good. Studies show that overprotected kids areÂ bulliedÂ more often, can’tÂ solve problems, areÂ less satisfiedÂ with their lives, and have higher rates ofÂ depression, anxiety, and evenÂ obesity. Not to mention, Worst-First thinking drives you crazy….

Â A 2014 study by theÂ Annenberg Public Policy CenterÂ confirms this; researchers found thatÂ even though crime has dropped, Americans are more fearful due to the sheer proliferation of violence we watch on TV.

While I don’t endorse the idea that overprotected kids are stunted for life — or even have a tougher time day to day — I do believe excess worry is a unnecessary, joy-sapping by-product of a culture bent on driving even formerly Free-Range Parents into a pessimistic tailspin.

After more rationality and kindness, the article ends up begging grandparents to please try to keep their fears in perspective. And the only comment so far boils down to “Yes, the odds are one in a million, but who wants to take the chance of your kid getting killed?” 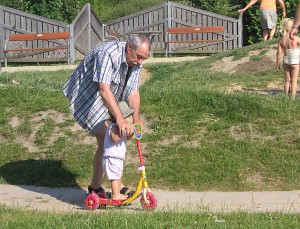 How can overprotection be an “instinct” when those same grandparents raised Free-Range Kids?Â

Why We Are So Afraid and Confused and Get Child Dangers ALL WRONG
Cops and CPS Interrogate Mom Who Let 6 y.o. Play Outside