Hi rfdhdiehkr
Readers — I got both these letters today and felt that together they make the point: We must start letting men know we TRUST them around kids. Thinking the “worst first” of all males is not only insulting, it is damaging the fabric of our society, pulling men away from their age-old jobs of Â protecting and mentoring. (Yes, women fulfill those roles, too. Â But the more the merrier!)

“You like kids? You must be a creep!” is a weird, paranoid, Nancy Grace-induced attitude. No one’s saying we should be naive about child abuse. But to have child abuse top-of-mind every time any man has anything to do with a kid is, well, perverted! Talk about ironic! — L.

Why I Didn’t Help a Lost Little Girl by Alan, in Utah

Our city had a carnival today.Â  While my 3 youngest boys were off atÂ the dunk tank. (*Gasp* — by themselves!Â  With money even!) I was sittingÂ at a table with all of the boys’ stuff (shoes, socks, stuff from theÂ parade) when I noticed a little girl separated from her mom.Â  It mustÂ have just happened because she looking around bewildered at first, butÂ within just a few moments she was crying pretty hard.

My first instinct was to go and see if she point out her mom, but Iwas worried about someone accusing me of something and being arrestedÂ and my boys coming back to an empty table.Â  So I sat and watchedÂ uncomfortably while this poor little girl became more and moreÂ agitated and crying more and more loudly.

Now, the part that bothers me the most about this is that there was aÂ group of three women standing not 5 feet from this little girl.Â  TheyÂ ignored her completely.Â  I finally decided to get up and do somethingÂ and had gotten just a few feet from this little girl when one of theÂ women butted ahead of me and asked her if she’d lost her mother.Â  AsÂ she escorted the child past she hissed, “Pervert!” at me.

I kept thinking of that poor man inÂ EnglandÂ who saw the little girlÂ walking who ended up drowning and was too afraid to stop and help her.Â I remember thinking when I heard that that there was no way I’d justÂ drive off and leave her … but I know better now.Â  I’m much lessÂ likely to help a distressed child because I’m too afraid of what might
happen to my own kids.Â  And that’s just sad. — Alan

And here’s the other note

“Stranger Danger” does cut both ways. Over the fall and winter I used to take my son to a playground closer to my daughter’s daycare. The kids there would ask me to play quarterback in the pickup football game (and let my three-year-old play, which was awesome). This was a lot of fun for everybody and gave the kids an unbiased referee (me), a quarterback who could throw deep passes (me), and a kid with a *brand new football* (my son), which is more or less pickup football nirvana.

One of the kids, who didn’t have a dad at home, got very attached to me… told me all his stories, wanted to stand close to me, wanted approval, Dad stuff, I guess. And because of this whole “stranger danger” mentality, I could just sense this sort of wary disapproval from the few other parents at the playground (none of whom were playing with any kids, not even their own) who just sort of watched. Watchfully.

I felt weird about the situation, so I just stopped going to that playground. Which was probably the wrong thing to do. It’s sad that even though I knew that I wasn’t a creepy stranger, I was so worried about being seen as a creepy stranger that I gave up a perfectly good opportunity to mentor a troubled kid for a few hours a week. — Philosodad 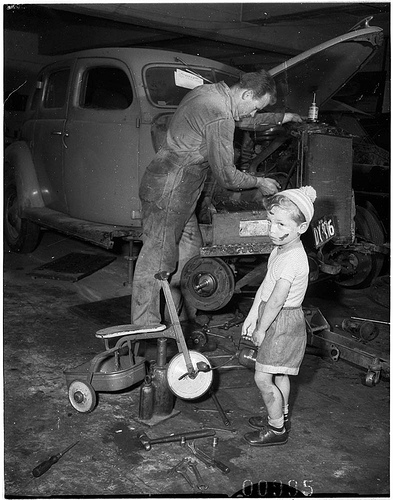 Oh no! A grown male near a child!

Why Is This Thing in Every Preschool?
Interview with Author/Blogger/Parent Cory Doctorow

100 Responses to Guest Posts: Why I Didn’t Help A Lost Girl (And Troubled Boy)