Granted, if children’s dictionaries were never updated, they might be learning “A is for alchemy,” or “B is for bellows.” (Feel free to add your own outdated faves.) But it nettled more than few scrappy scribes to see some of their favorite childhood outdoorsy words flung into the moat of history. As reported by Alison nrrhyzfrii
Flood in The Guardian:

â€œAâ€ should be for acorn, â€œBâ€ for buttercup and â€œCâ€ for conker, not attachment, blog and chatroom, according to a group of authors including Margaret Atwood and Andrew Motion who are â€œprofoundly alarmedâ€ about the loss of a slew of words associated with the natural world from the Oxford Junior Dictionary, and their replacement with words â€œassociated with the increasingly interior, solitary childhoods of todayâ€.

The 28 authors…warn that the decision to cut around 50 words connected with nature and the countryside from the 10,000-entry childrenâ€™s dictionary, is â€œshocking and poorly consideredâ€ in the light of the decline in outdoor play for todayâ€™s children.

They can caterwaul all they like, of course. Who’s more merciless than a children’s dictionary editor? And yet, really, Oxford. You added the word “celebrity”?

The likes of almond, blackberry and crocus first made way for analogue, block graph and celebrity in the Oxford Junior Dictionary in 2007, with protests at the time around the loss of a host of religious words such as bishop, saint and sin. The current 2012 edition maintained the changes, and instead of catkin, cauliflower, chestnut and clover, todayâ€™s edition of the dictionary, which is aimed at seven-year-olds starting Key Stage Two, features cut and paste, broadband and analogue.

The withering wordsmiths say the understand the need to introduce new words and insist their beef is not just neurasthenic nostalgia.

â€œThere is a shocking, proven connection between the decline in natural play and the decline in childrenâ€™s wellbeing,â€ they write, pointing to research which found that a generation ago, 40% of children regularly played in natural areas, compared to 10% today, with a further 40% never playing outdoors. â€œObesity, anti-social behaviour, friendlessness and fear are the known consequences,â€ they say.

The campaign has been pulled together by Laurence Rose, who works for the RSPB and who provided a list of words taken out, including hamster, heron, herring, kingfisher, lark, leopard, lobster, magpie, minnow, mussel, newt, otter, ox, oyster and panther.

Now in truth, a kid can probably muddle through life without a whole lot of kingfisher references. But to take out hamster? What are they gong to call those guys? Pudgy mice? Indeterminate classroom pets? Animate slippers?

Motion, the former poet laureate, said that â€œby discarding so many country and landscape-words from their Junior Dictionary, OUP deny children a store of words that is marvellous for its own sake, but also a vital means of connection and understanding.

â€œTheir defence â€“ that lots of children have no experience of the countryside â€“ is ridiculous. Dictionaries exist to extend our knowledge, as much (or more) as they do to confirm what we already know or half-know,â€ said Motion.

So perhaps it’s time for a rallying cry: Save the hamster!

And while we’re at it, save the idea that the outdoors is a place for kids. — L. 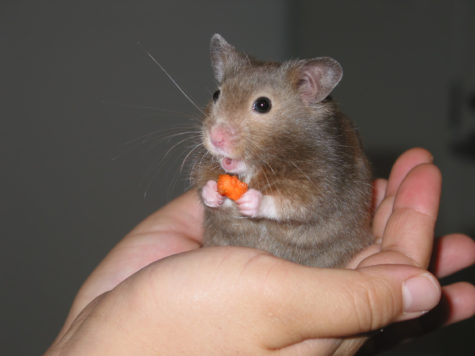 You’d never dump me, your furry friend, from the dictionary…would you?Â

A “Chilling New Portrait” of Child Predators? Or a Craven Old Way to Scare Us Sh*tless?
The Gorilla, The Boy, The Mom and the Shamers

32 Responses to “Hamster,” “Ox,” “Otter,” and Other Natural-World Words Removed from Children’s Dictionary