When Curious George was born 75 years ago this month, his German Jewish parents, H.A. and Margaret Rey, were fleeing the Nazis. They took George with them, in the form of a manuscript. As Alison adnrssenkz
Lobron notes in The Boston Globe:

Three generationsÂ children have grown up with Curious George, who celebrates his 75th birthday this month and continues to star in several new stories a year. Heâ€™s still inquisitive and prone to find trouble. But as tastes and publishing standards changed, George lost some of his curiosity â€” and his adventures have largely lost the element of danger.

Of course! Like the children’s bible one commenter once wrote in about, which said, “Then Jesus went away,” making it sound as if He spent a long weekend in Bermuda, Curious George’s struggles have considerably lightened. The original books, Lobron writes,

…were sometimes funny and sweet, but they were also scary. In â€œCurious George Flies a Kiteâ€ (1958), George takes a frightening airborne voyage after flying a kite without permission. Floating high up above his town, George didnâ€™t exactly enjoy the view. He â€œdid not like it a bit. He wanted to get down, but how? Not even a monkey can jump from the sky.Â George was scared.â€

Other early stories feature similar frights. While being chased by angry grown-ups, he jumps off a fire escape and breaks his leg. He rides a rocket into outer space â€” two years before Sputnik! â€” aware of the distinct possibility he might not come back down. And, of course, Georgeâ€™s first encounter with the Man with the Yellow Hat is truly terrifying: George is snatched from his home in an African jungle, a scene whose imperialist overtones are disturbing, on a different level, for todayâ€™s readers.

Though far less gory than the original Grimmsâ€™ fairy tales, Georgeâ€™s experiences are extreme versions of situations that children might encounter. George always comes out right in the end, but the happy endings donâ€™t erase all the scary parts that came before.

But in the past generation, new stories added to the George oeuvre have the monkey doing things like —

making a mess in the kitchen or upsetting a bookstore manager by building a tower of books. Things always wind toward some incredibly nice resolution, on a scale far too grand for whatever mistake prompted the episode.

The books are like the literary equivalent of a giant, high-five “Good job, buddy!” for a kid who does half a somersault. Let’s pretend that’s the greatest thing ever!

So let’s call these new books by their true name. Not Curious George. Cautious George, a little monkey who plays it safe.Â If “plays” is the word.

And if you want to come up with the names of some other, newly cautious classics, feel free! – L. 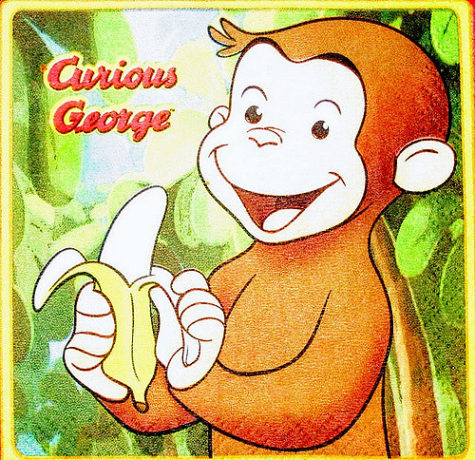 Curious George and the Non-organic Banana. Be careful, little guy!Â

“We Did Everything Right in Our Seemingly Safe Neighborhood and Yet, It Happened”
“My Child Is Getting Too Much Playtime in Pre-School”