Readers ttfhzrnbhf
— This is an excerpt from an article in the family issue of Real Simple that’s on the stands now.  Read the whole piece here.

A couple of years ago, my then five-year-old son William took a standardized test in which he was asked about everyday objects. The tester noted his unusual responses to some questions. When asked “What do candy and ice cream have in common?” William replied, “They both give you cavities.” For the question “What is chewing gum?” William answered, “A choking hazard.”

William, now seven, is my oldest; his sister and younger brother are six and three. Last year William and I had an exhausting summer as we struggled between his desire to grow up and my desire to keep him safe, which basically means locked in our house: no playing on the front lawn, no crossing our busy street, no swimming in the ocean. This year I vowed to break free. I was tired of saying no all the time, and I knew that as William grew older, he would only want to become more independent. But I knew I couldn’t get there alone—I needed a copilot who could stop my anxious mind from spinning. So I called Lenore Skenazy.

Lenore is the author of Free-Range Kids: How to Raise Safe, Self-Reliant Children Without Going Nuts With Worry, ($12, amazon.com) and she is my polar opposite. In 2008 she let her nine-year-old son ride the New York City subway alone and wrote a column about it for the New York Sun. After national media picked up the story, Lenore was dubbed America’s Worst Mom, so she founded Free-Range Kids, a grassroots movement to give children more autonomy. According to Lenore, hyper-protective parents like me are not only driving ourselves crazy but also depriving our kids of the satisfaction that comes with mastery and self-sufficiency. She even makes “Free-Range house calls,” in which she visits nervous parents to help them see how competent their kids can be.

I was ready to change, but I couldn’t resist asking Lenore, “Isn’t there a safe way to teach children to take risks?”

“Of course,” she said. “I’m a big fan of safety measures—bike helmets, seat belts. I just don’t think kids need a security detail every time they leave the house. Risk and risky are not the same thing, but our culture is determined not to see the difference.” Whenever a child gets on a bike, he’s taking a risk, Lenore told me, because he could fall and break an arm. (I resisted the urge to hang up.) Riding a bike at night without reflectors, however, is risky. “You can limit risky behavior, but you can’t eliminate risk,” she said. “If a child never tries gum, he’ll never choke on it. But he could choke on a bologna sandwich.” I had to admit she had a point.

Read what happened next! 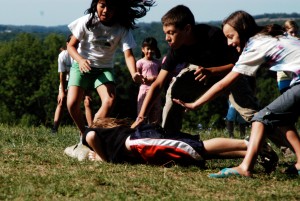 17 Responses to Help for Overprotective Parents: A Free-Range House Call