Readers — Donald Christensen, a longtime Free-Range supporter, deep thinker about encouragement, and author of the blog Tryathlete.org, came up with a great idea: Let’s make a then-vs.-now poster with all the modern-day things we say to kids to keep them “safe”… that really just depress, demoralize or defeat them. Woo hoo! 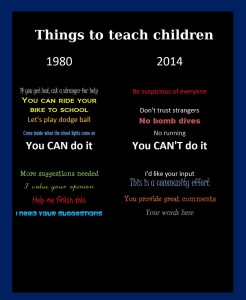 Now, I realize this poster can be hard to read on a screen, so here’s what’s on it so far:

The rest of the poster asks for your suggestions! So…suggest! – L.

Breakfast of Algorithms
So Maybe I’m a Sap, But…

104 Responses to Help Needed: Add to This Funny (but Sad) Poster