Readers — This is a two-part post. First comes a letter from Lisa, a mom in Arizona who had her kids (2 and 4) wait in the car while she ran an errand and is now facing charges of neglect. The temperature that morning was mild, not sweltering. The second part is a letter to Lisa from The National Association of Parents‘ founder, David DeLugas. He has pledged to use new membership duesÂ ($19 for a year) and donations toward hiring Lisa a lawyer.Â I’m a member! Read on:

Dear Free-Range Kids: It was approx 11 a.m. on Friday, Oct. 11th. I realized I was out of dog food. My oldest would have normally been at school, but she had a fever, so she stayed home with her brother and me. I went to get dog food. I decided to leave both children in the car. (My Nissan is a push button start, so I can leave it running). I had the ac on, doors locked. The errand took a lot longer than I anticipated. I was waiting on the clerk to tell me about a specific brand of dog food. She had to consult with another employee about it. A 5-minute trip turned into what I am guessing to be 15 or 20 minutes, tops. (The police report states up to an hour.)

As I walked out of the door, I saw 2 police cars, and a fire truck. I ran to the car, unlocked it, and they forced me to remove my children. Both were crying, as I was. I was begging please don’t take my babies. Both children were clinging to me. Officers took photographs of my children and the inside of my car. They kept me and the children there for awhile. They said if I didn’t cooperate fully their sergeant told them to arrest me.Â

After telling me all the horrific things that could HAVE happened, they let us go.Â

A lady from CPS came the next day, but I was out of town. She talked to my husband. I got back Monday afternoon. She came on Tuesday. I was afraid. I was apologetic. She asked if she could speak with my daughter alone, I obliged, even though it was uncomfortable for my daughter and I. When her and my daughter came out of a guest bedroom, she asked my daughter in front of me about good touch and bad touch, and asked if she had ever been touched. She said no. I tried to smile thru all of this, but I was extremely uncomfortable. The case worker noticed my son’s happy and laid-back personality. Then said something bizarre. That he seems to have my husband’s demeanor. I smiled, but took it as insult.

The aftermath of this has caused all of us serious anxiety. Now, when I pick my daughter up from preschool she’ll say please don’t stop for gas mommy, Â or, “You don’t have to go anywhere do you?”Â

And now — how to help. Here’s what DeLugas wrote to Lisa, which she shared with me:

The hearing on January 15 is an “arraignment” and that, unless Arizona is different, is nothing more than the charges being read and your pleading not guilty.Â  In fact, if you hire an attorney, most likely the attorney can agree to waive the arraignment and plead NOT GUILTY without your going to court.Â  Then what would follow is your attorney sending the prosecutor “discovery” asking for everything the prosecutor has in his or her file and preparing for a jury trial.

You must find an attorney.Â  We will try to raise some money so that we can pay the attorneysâ€™ fees, realizing that you, like most parents, just donâ€™t have an extra few thousand dollars to fight back against such absurd charges.Â  If we had the membership base or the donations that I know we will one day soon, we wouldnâ€™t have to have a specific fund-raiser for you. Alas, we are not yet there.Â  Your attorney might decide (and I recommend) (a) that you engage an expert witness to refute the notion that you endangered your children, (b) that you have evidence of the weather conditions that day (your testimony may differ from the witness for the State), and (c) that you are prepared to testify.

I would expect that, after consulting with an attorney, you will plead “NOT GUILTY” and prepare for a jury trial where, for it to convict you, the State has the burden of proving beyond all reasonable doubt that you “knowingly caused or permitted the LIFE of [your children] to be endangered”Â  . . . “by neglect.” Â That is what is in the Arizona statute under which you are being charged. I already spoke with several attorneys and will help screen them and even will help the attorney hired with strategy and preparation for trial.

I would also suggest a motion to dismiss the charges based on the unconstitutionality of it.Â  Initial thoughts are that it is vague in that “endangered” is not defined in the statute.Â  After all, a parent who allows her child to play tackle football, ride a dirt bike, go bungee jumping, participate in cheerleading or gymnastics, or go scuba diving â€œendangersâ€ the child, too, because the risk of harm to a child from those activities is probably GREATER than the risk that your children would be harmed in the locked car, AC on, while you were inside a store (whether 15 minutes or longer).Â  As well, the usurping of the right of parents to raise their children unless actual harm comes to the child is a violation of the Constitution and this statute infringes on that right. Together, we will consider having a professor at a local university who deals with risk analysis to do so and prepare to testify.

…I urge you NOT to plead to a lesser charge or to accept a plea deal where you are “only” on probation.Â  That is exactly the outcome the prosecutor wants, likely expects, from parents who donâ€™t want to face the risk of conviction, but prefer to pay the fine and be on probation.Â  You are not a bad parent.

Readers: Here, again, is the link for the National Association for Parents. I’ll write a post about them soon. I like what they are doing and sure hope they can help Lisa! This could be the start of something big. – LÂ 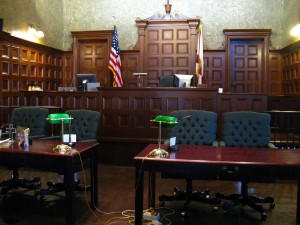 A mom faces her day in court.

School Shootings in Perspective — From Colorado
KARAOKE CONTEST! Strangers in the Schools: A Song for Glen Ridge NJ on Election Day

52 Responses to Help Needed: Mom Who Let Kids Wait in Car Needs Lawyer and Is Distraught