Readers — Do parents really have to strap a vital signs monitor on their healthy babies? That’s the question David King, a professor of pediatrics at the University of Sheffield in the UK, sought to answer. And frankly, it was easy.

In the 1980s and 1990s a plethora of similar products was developed and sold with the intention of reducing sudden infant death syndrome (SIDS). Unfortunately epidemiological studies showed that such devices had no effect on the incidence of SIDS in healthy infants.567 The American Academy of Pediatrics states that home cardiorespiratory monitors should not be used as a strategy to reduce the risk of SIDS.8

And yet, of course, they are. King points out that one company’s president states he was moved to invent a baby vital signs monitor after a relative died of SIDS. Another device’s marketing materials promise to provide the “relief” that comes from “keeping babies safe.”

As if they’re not.

As if the only thing standing between your baby and the guy with the scythe is a device you can buy for a couple hundred bucks that mimics the ones used in neonatal intensive care.

Talk about Worst-First Thinking: “Just because my baby got a clean bill of health doesn’t mean I shouldn’t proceed as if he’s on the edge of the abyss.”

Congratulations, First World. After a generation of making everything else normal seem dangerous — walking to school, playing outside,Â drinking from a plastic cup — you have finally figured out how to scare us while we stare at our healthy babies safe in their crib.

NowÂ THAT is advanced. 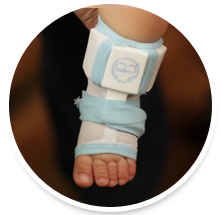 How to Respond to Two Needle-in-Halloween Candy Incidents?
“The Cult of Kiddie Danger” — How Fearing for Our Kids has become Our National Religion

42 Responses to Hey Parents: Treat Your Healthy Baby Like She’s in Intensive Care!