A reader writes that her high school student son is not allowed to cross the street you see here:

Dear btshyykffy
Free-Range Kids: So, my son is going to Summer School. I got a note from the school district transportation department just now with information about Summer School busing and you have to see this. I took a screen shot to prove it because it is too crazy.

This bus is ONLY for high schoolers. Kids going into 10-12th grade!
Â

Do you see that in all caps and bold?! With an exclamation point!
STUDENTS ARE NOT ALLOWED TO CROSS McCALLUM!
McCallum is just a street.
It’s not a highway.
It’s just a STREET.
It’s not even a particularly busy street at 2:22 in the afternoon and it has a MEDIAN.

The reader asked her son his thoughts. He responded:

“I can’t cross the street?! What is this?! Last I checked, it was high school, not kindergarten! Most kids my age have drivers’ licenses, but we still aren’t allowed to cross the street without an adult?! I know to look both ways before I step off the curb and, at 6’2″, I’m taller than both my parents and any crossing guard I’ve ever known. This is absurd.”

I know, I know, this is just the school district wanting no responsibility if the kids get run over — but that’s absurd.

Â Concluded me: Yup. We have a society conspiring to cripple our kids with “precaution,” which is always billed as, “for their own good.” – L. 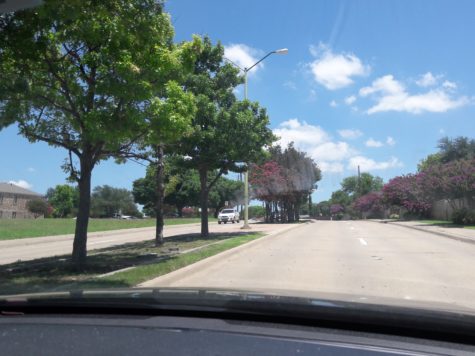 A busy stretch of McCallum Road. Watch out for crazy Â rules.Â

Pants Zipper vs. Car Jacker
Man Trying to Help Lost Girl Is Mistaken for Predator and Beaten by Her Dad