Readers — One of you sent me this fascinating piece on hitchhiking that ran in the New York Times last year. The writer, Ginger Strand, author of  Killer On the Road, points out that hitchhiking had been a normal mode of transportation, never considered particularly dangerous, until the late ’50s when:

The F.B.I. began warning American motorists that hitchhikers might be criminals. A typical F.B.I. poster showed a well-dressed yet menacing hitchhiker under the title “Death in Disguise?”

In the ’60s, the focus began to shift, emphasizing dangers to the hitchhiker instead of the driver. Although many states had some kind of regulation of hitching on the books, communities like Los Angeles, Boston and Nantucket, Mass. began debating municipal bans on soliciting rides. Officials in Cambridge, Mass., took an unusual approach, voting in 1971 to levy fines on motorists who picked up hitchhikers. In towns across the nation, the police arrested underage thumbers and distributed pamphlets. Police officers at Rutgers University handed out cards to hitchhiking women that read, “If I were a rapist, you’d be in trouble.”

Women, in particular, were said to be “asking for it” if they put out a thumb. The news media took the bait, writing scores of articles denouncing the practice. “In the case of a girl who hitchhikes,” a 1973 article in Reader’s Digest declared, “the odds against her reaching her destination unmolested are today literally no better than if she played Russian roulette.”

That was an absurd exaggeration. There were some well-known cases of murderers preying on hitchhikers, but there was no evidence that hitchhiking actually increased the murder rate. The one agency to commission a study on the subject, the California Highway Patrol, found in 1974 that hitchhiking was a factor in 0.63 percent of crimes in the state. That’s hardly Russian roulette. The patrol agency concluded that reducing hitchhiking would probably not reduce crime. But by then the public perception had been transformed. Hitchhiking was considered so reckless that few drivers would encourage it by stopping.

Read more here, and then think about how hitchhiking died the same way (and the same time) walking to school did. Suddenly, nothing was safe beyond one’s own home or car. Young folk, especially, were told not to hitchhike, and so were stuck at home. So as we fight for Free-Range Kids, let’s bring hitching back, too.

Over the summer I was driving with my younger son and we picked up a hitchhiker who was otherwise stuck walking a mile or two to his construction job. Made my day (and his)! And I was happy my son saw me helping and trusting a stranger. A man, even! – L. 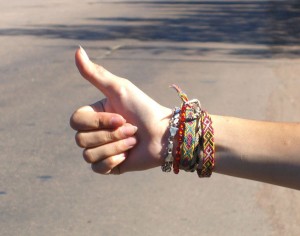 Whose Idea Was it That Children are Fragile and Stupid?
George Orwell and The Elf on the Shelf

58 Responses to Hitchhiking Did Not Die a Natural Death