Readers — This is one bfstnekabt
of the most fantastic editorials I’ve ever read. It’s in Canada’s National Post.  The only think I don’t agree with is blaming a particular party for over-reacting to remote childhood dangers. Our entire culture is tied up in knots about danger, unable or unwilling to understand that risk is inevitable — it doesn’t represent negligence, it’s just part of life. – L

A new school year began on Tuesday, and Toronto’s often hysteria-prone news crews were geared up for the scare stories that always get served up by nervous parents this time of year.

It didn’t take long. A four-year-old Scarborough boy wandered into the wrong classroom on his first day in school, wearing the wrong nametag, and wasn’t immediately spotted. Cue panic: The police were notified, an alert went out, dozens of police with a K-9 unit turned up to scour the neighbourhood, terror spread. The little boy watched it all obliviously, until teachers spotted the mistake.

Later the same day, another four-year-old, named Alexander, got off the bus at the wrong stop after classes. He wasn’t far from home and was quickly spotted by a daycare worker who noticed a tag on his backpack and called the school. The principal promptly arrived to pick him up and return him to his parents. The bus company delivers almost 50,000 kids a day on 1,600 routes, but Alexander’s plight made local newspapers, radio bulletins and Twitter updates. His father was irate, the bus company was on the hot seat, experts were consulted to discuss what could be done to prevent a recurrence. The notion that, in a city of several million, a child occasionally will get off at the wrong stop, wasn’t considered.

Security is a legitimate concern — especially where children are concerned. And parents naturally slip into terror mode whenever a possible threat to their child arises. But Canadian schools now take the cake when it comes to hitting DEFCON 1 whenever a kid gets off at the wrong stop or spots a peanut in the lunch room.  … 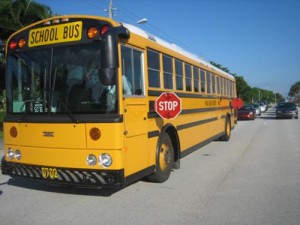 Why is it NEWS when a school bus drop off is not perfect?

Harumph: “Back to School” Tips forget One Thing
Germ-phobia in the Schools