Readers — A 6-year-old boy with autism had disappeared from his San Jose, CA home at 9 .a.m. Turns out, he had wandered off and was atiifibits
found in the middle of the night by a group of homeless men and women who live in an encampment nearby.

Does this remind anyone else of the Guinevere and the FireÂ song posted here last week? The one in which a girl, heeding her mom’s advice, avoids seeking help from the Aboriginal encampment near her home and runs to a white family much further away — and in the meantime, her mom dies?

What a much happier storyÂ this one was! While my guess is that if San Jose residents knew they were living near a camp of homeless folks, many might not have been thrilled about its proximity to their homes and children, and yet —

SAN JOSE — Jose Salmeron woke early in the homeless encampment he often stays at and intended to take a makeshift shower when he heard a strange rustling noise.

“I popped out of my tent and I saw a naked person. At first I thought it was an alien, like ET,” said Salmeron, who said he did a double-take and grabbed his flashlight. “I shined my flashlight at him and when I looked closer it was a little boy.” He hollered to his fellow camp mates, ‘Come out, there is a naked boy out here.'”

The boy was 6-year-old Sergio Zepeda, who went missing Saturday morning and was the subject of a frantic overnight search until he wandered into the encampment, startling the residents. Soon after, around 4:15 a.m. Sunday morning, another resident of the encampment called 911 and gave what turned out to be good news to the dispatcher. 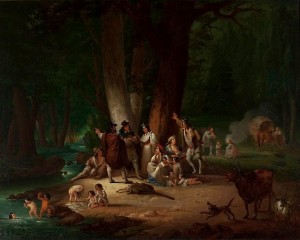