This is how insurance companies think, blame and change our culture. The paragraph below appears at the top of the Â “Effective zfkafbstrs
Playground Supervision” pageÂ Â on the site of West Bend Mutual Insurance. West BendÂ insures the “businesses that many standard-lines companies shy away from” including, “daycares, fitness centers, swim clubs, summer camps and non-profit organizations.”

Just today I got a note from a middle school teacher who let her kids do their math sheets outside and one of the kids stepped onto the sidewalk, hurt her ankle, and the parents sued. The school had to settle out of court, the prospective damages were so high. So I do understand that litigation is a minefield.

But even more dangerous is the deeply flawed idea that every time an accident happens, someone is to blame, and the only way to prevent accidents (or liability) is to PROVE that adult eyes were never off a child, not even for a second:

A group of twelve children were playing on a playground at their childcare center when a six-year-old girl fell from the structure and severely broke her arm. Two teachers were supposed to be supervising the students, but were in the middle of a conversation when the accident occurred. It turned out the girl was attempting the walk across the monkey bars, lost her balance, and fell. If the teachers were supervising properly this injury never would have occurred.

Feel free to sputter along. — L. 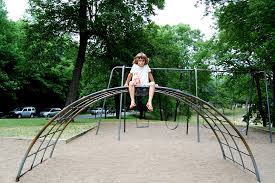 Boys 10 & 11 Save Two Kids from Burning Home
To Volunteer, All You Have to do Is…