Reader zahsidrhfd
— Welcome to the wisdom of Philip Howard, the lawyer, intellectual, and founder of Common Good, whose book “Life Without Lawyers” opened my eyes to how we got so risk-averse. Here’s that whole book boiled down, more or less, in a recent blogpost by Howard. It explains how we got to the point where we feel free to sue everybody for everything, and the effect this fear of being sued has. The red ink is my effort to BOLD his great points:

The Evil of Investing in Litigation, by Philip Howard

…A side effect of the 1960s rights revolution was the idea that people had a right to sue for anything. Human suffering became an opportunity to get rich. Entrepreneurial plaintiffs lawyers like Dickie Scruggs, Mel Weiss, and John Edwards congregated at the intersection of human tragedy and human greed, and became tycoons. It was easy work for anyone with a knack for sales. Just find any human suffering—a baby born with cerebral palsy, a company that went bankrupt, smokers who got sick—and sue for the moon. It was all about emotion: “How much would it be worth to you to have emphysema?” The families of victims got rich. The lawyers, skimming a third or more out of multiple verdicts and settlements, got really rich. Class actions were the pot at the end of the rainbow. Scruggs reportedly got a billion dollar fee for settlement of mass tort claims on behalf of the State of Mississippi….

These direct costs of sue-for-anything justice are only the tiny tip of a far larger cost—a pervasive fear of litigation has replaced a sense of freedom and spontaneity in social dealings. A tidal wave of defensiveness has washed over American culture. When anyone can sue for almost anything, people start going through the day looking over their shoulders. Doctors waste billions in “defensive medicine.” Teachers no longer feel free to put an arm around a crying child. Businesses no longer give job references. Diving boards and seesaws disappear. Companies don’t take risks with innovative new products. Better safe than sorry. America’s can-do spirit turns upside down. Welcome to the culture of can’t do.

…Moreover, a lawsuit doesn’t just affect the immediate parties. What people can sue for establishes the boundaries of everyone else’s freedom. If a school in California gets sued when a child falls off a seesaw, you can be sure that schools in Massachusetts will remove seesaws….The solution—the only solution—is for judges and legislatures to draw the boundaries of who can sue for what as a matter of law. Every claim should first go through a legal gatekeeper, asking whether this claim might erode the legitimate freedoms of people in society. These rulings of law should affirmatively defend the freedom of people to take reasonable risks—like, say, children on a seesaw.

Lenore here: In short, the assumption behind the “You can sue anyone for anything” is that there should be NO RISK at all to anyone doing anything. When that attitude gets absorbed by the population, it is scared and angry all the time. Scared that something bad might happen and angry when it does, with no sense of proportion or what’s lost by outlawing all risk.

I agree that lawsuits that ignore the reality that, say, SOMETIMES a child will get hurt on a seesaw MUST BE thrown out. Otherwise, nothing is safe enough and childhood becomes vanilla pudding. (Served room temperature, so no one gets burned, and eaten with one’s fingers, so no one chokes on a spoon.) – L 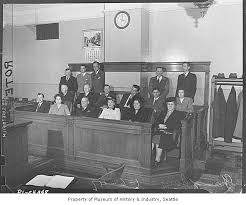 When we can sue anytime a child gets hurt, schools and park districts have no choice but to pre-emptively get rid of almost all “risk” — like seesaws.

64 Responses to How Lawsuits Have Changed Childhood…and America