Hi tbtikaeafk
Readers! I just got this very legitimate question about what the heck underwear flammability regulations (see below) have to do with Free-Range Kids, and as I was writing up my response, I realized it made sense to share it. So here you go: a Q &A with — me!

Dear Free-Range Kids: How is this a Free-Range issue? It’s about a government safety rule (agree with it or not, it is what it is), and a store that has to comply and a manufacturer who could be sued — and forget could, WOULD be sued because we live in a society where people DO that, for anything that seems to go wrong and could result in money. It’s not “weird,” it’s a perfect example of how the world works.

So back to my question — how is this a Free-Range issue? I thought it was about parenting, about encouraging our kids to be responsible for themselves and not be afraid of the world. Not about a company following a government”s policies.

As I look at how parenting has changed in the past generation or so, one of the factors making us more scared is the idea that everything is dangerous. Walking to school, drinking from a plastic cup, buying a used high chair, putting your kid in a shopping cart, eating a homemade cupcake…you name it.

When the government reinforces the idea that very remote dangers are dangers that we should nonetheless address immediately and keep high on our radar, it is adding to the anxiety of the average parent. In effect, it’s telling us, “Your child is almost always unsafe!” It also reinforces the idea that a .00000003 % chance of danger is not an acceptable risk to take. Â See the post somewhere below about a nurse who warned parents that a “Baby on Board” sign could decapitate a child.

When we “What if?” to that extent — What if we’re in a horrible accident AND maybe the child COULD survive, BUT Â the “Baby on Board” sign becomes detached AND flies horizontally through the air AND hits the child RIGHT in the NECK, THEN how would we feel with a decapitated kid that we could have saved if only we’d been a little more proactive about safety? — when we’re encouraged to think like that, nothing is proactive or protective enough. Society is telling us we should be thinking about the most far-fetched, ludicrous, summer-Hollywood-blockbuster scenarios and planning for them, seriously, or we are bad parents putting our kids in danger.

In the case of the store recalling its pajamas that aren’t up to code (though they WERE up to code when they were labeled underwear), I totally agree: The store had to comply or risk being sued. That’s outrageous, too, and I consider lawyers crying, “Negligence!” when there is none to be part of the problem, too. Excess litigiousness is part of the whole shebang of Â dangerizing everything.

Thus we have reached the point where most normal childhood activities, equipment, and, now, pajamas Â all seem extremely — and equally — unsafe. And as a result, there is less and less we allow our children to do, especially on their own. We pull them ever closer out of fear of everything, everywhere.

That changes childhood, that changes parenting, and THAT is why this piece is here.

Thanks for asking. –Â Lenore 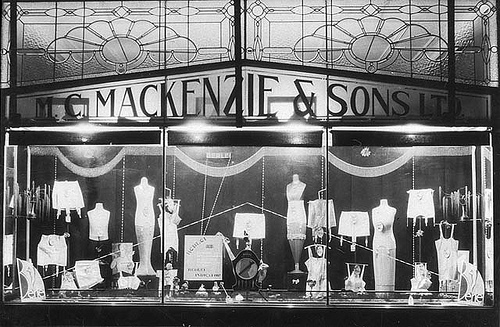 Cool, if gratuitous, photo of underwear!

The Underwear Police
How Do You Get Kids Back Outside, Playing? One Cool Idea