Readers — This yhhsdbfahr
is an incredibly heartening story from England where, about five years ago, Alice Ferguson and her neighbor Amy Rose Â petitioned to close off a local street for three hours one evening. Â Guardian reporterÂ Sarah Lewis Hammond quotes Ferguson saying:

â€œIt was as if it was something they did every day. The adults started reminiscing about childhood memories of playing out we all said that this should be a normal part of our lives.â€ The result was not just a day of play, but a whole campaign â€“ Playing Out.

Playing Out was too good an idea not to spread. Across the country, other parents petitioned to close off streets for a chunk of time, and now they’re all over. Kathryn Kay’s city first tried the idea in 2012, As she told the Guardian (boldface mine):

Â â€œWe were blown away by what happened. No one even knew there were that many children living on our street. Itâ€™s not just the children who have benefited though. The social ripples have carried on and important connections were made between adults.â€

A ha! This is exactly what we all want here at Free-Range Kids: A chance for kids to connect, and adults to do the same!

For Ferguson, it has been a justification of all the things she thought about parenting. â€œIâ€™ve realised other people feel the same about their kids, that other people support the idea that children should be able to be outside in public space and itâ€™s not a neglectful thing to want your children to play out semi-independently.” She talks about how her son now calls on the boy who lives opposite with a wonder that belies the simplicity of the act, and there is a little sadness that in efforts to move away from the cult of constantly scheduled activities, the free play itself has become scheduled….”Weâ€™re all overprotective, but we look too much to the risk of children being outside and not enough to them being inside.â€

All hail these ladies and the realization that everyone’s happier when the kids are back outside, and not constantly supervised by their parents one-on-one. In my neighborhood, Jackson Heights, Queens, we, too, have a “play street” reclaimed from traffic. This can be done! If you’ve done this or are now ready to try, share your stories! – L 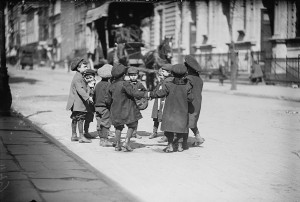 Okay, so your “play street” will not look exactly like this.

12 Responses to How to Get Kids Outside in Your Neighborhood