Readers — So many truths turn out to be counter-intuitive, including this little lesson from a Canadian Hockey Mom:

At a hockey tournament last weekend, where EVERYTHING was adult-organized, and the only “toy” these grade 6 and 7 boys brought along was a goddamned Playstation or Xbox or some crap like that with games where everyone is machine gunning each other to death, some kids self-organized into a little group playing soccer with a Wiffle ball in the hallway.

The hotel management requested that our group avail ourselves of the “breakfast room” that was not in use in the off hours, in order to have a “common area” out of the way of other guests. I jumped on it!

I guided the three or four “playful” kids into that room, and soon after, others joined. Soon enough, the whole team was there, and you know what they decided to play? MUSICAL CHAIRS. I kid you not. One boy sang “Pop goes the Weasel” while the others paraded around the chairs. It devolved into the WWF version of the game, but I just sat as the lone adult in the corner, focused on my own game (cup stacking, a decidedly low-tech endeavour), letting them whoop and holler and PLAY.

More parents trickled in, and I was able to calm them into submission as they drank their wine. We looked at the kids as though viewing wild animals, and commenting on just how happy they seemed. “This is what they need in their lives,” I told the parents. “More of this. A lot more of this. Hockey is fine, but they need at least as much of this as they do organized activities that adults lead.”

Some kids were getting called off to eat by their parents, and they were crushed, promising, “I’ll be back right after dinner!” Well, I commented, how often does anyone hear THAT anymore? I realized that the thing to do was order in Chinese so the kids could keep on playing and building community. Amazing how eager these parents were to “Take responsibility for my own kid” and whisk them off to some isolated restaurant meal rather than join forces with other parents, but I taught them about that, too. “Let’s just order a few plates of whatever and they’ll eat it. We can settle up later.”

After a good two or three hours of games, sweating and smiles, the party broke up and the team played the next morning, their last game of the tournament.

They were a different team. Their passing game had improved exponentially. All of us in the stands commented about how much more cooperative they all seemed to be. 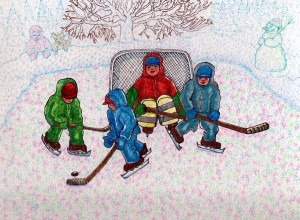 Dad on Foot Arrested for Refusing to Wait in Line of Cars to Get Kids
Oh Yes, Mr. Marketer, We are ALL Afraid Our Kids Will Be Snatched

15 Responses to How to Make Your Kids’ Sports Team Even Stronger (Surprise Tip!)