Dear Free-Range Kids: I tweeted this Parenting Magazine online article to you a few days ago but wanted to follow up because it has me so upset: “5 Safety Tips to Protect Your Kids from Abduction.”
Â .
The author is from a child-tracking GPS company, so of course it’s in his best interest to bend the truth. The article begins:
.

“According to the National Center for Missing and Exploited Children, roughly 800,000 children are reported missing each year, more than 2,000 a day. Even though the vast majority of these cases end with the child found safe, and never having been in danger, the sheer number is still shocking.”
Â .
So 800,00 is not accurate, but he flaunts the number like all of us should be shackling our children. The number includes runaways, parent/relative disputes and mistakes.
Â .
The real number of abductions by total strangers is more like 500 annually, right? [115, actually — Lenore] A far cry from 800,000. In fact, it’s misleading parents to believe that abductions by strangers are 160,000% more common than they are!
Â .
This article is written by a completely biased source, a man who wants to sell more kidsport GPS! It angers me that he’s passing on this misleading information, and that Parenting allowed it, too.
Â .
These kinds of things bother me so badly because I see our neighborhoods and playgrounds: empty. There are no kids riding bikes, playing outside, enjoying some freedom. As a children’s book author, I love kids and I think their development into strong, independent adults is so important. We’re not granting them the tools they need.
.
I know some of the “outdoor ghost town” stems from technology, but the other part is sheer parent fear. My generation is spooked senseless. Common sense has gone out the window! And articles like this one are fueling the fear.
Â .
Just had to get that off my chest! — Tara
.

So I went and read the article and here’s the part that makes ME maddest:

When I was a kid, my friends and I spent our hours after school meandering the neighborhood. Mom and Dad had no idea where I was or what I was doing, and they didn’t worry about my safety. In summer, I was gone at sunup. I was a racecar pulling in for a PB&J pit stop around noon, and dinner was just a distraction. I was gone for hours upon hours, and it was no big deal.

Today, it’s a different world. My daughter is almost 10. If she is three minutes late from a bike ride, her mom and I are freaking out. If we lose sight of her at the park, we panic. When we’re on vacation, I’m not only playing with her, but I’m also a CIA agent scanning the crowd for suspicious characters.

NB: The evidence the author gives for times being more scary “today” is that…he is scared. Somehow he was allowed to enjoy a carefree childhood, but today’s parents should be terrified at that thought.

To me, it’s scary how little it takes create a “different world” simply by injecting it with fear.- L 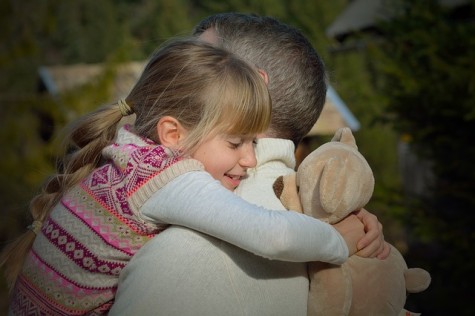 Thank you for saving me from that fear-mongering article, Daddy!

College Students Falling Apart, Thanks to “Helicopter Society”
Now You Can Check Your Child’s Whereabouts All Day Long. Don’t.