Readers zhbhbezfaa
— I was just on a radio show talking about  how we reflexively inflate the dangers facing children, and while I was on, this email came to Free-Range Kids. It  illustrates what I spend most of my waking hours dealing with: The belief that our kids are in constant danger, so only constant supervision can “save” them.

Can you please help this woman convince her husband that her child-rearing decisions are safe and sane? And, while we’re at it, can you convince everyone else, too? Because I’m shaking from the radio thing. (Details: A caller insisted that a 6-year-old is NOT safe waiting in a car for 5 minutes while his mom picks up a prescription. I asked how could the child be harmed, because I’ve found that the fear, “Anything could happen!”  is often dispelled if you ask folks to actually enumerate the dangers. So the caller said, “The kid could be knucklehead and put the car in gear.” When I replied, “Wouldn’t you take the keys with you?” He said, “Well, if you’re going to negate everything I say, then of COURSE things are going to seem safe.” Grrrrrr!) – L

Dear Free-Range Kids: I’m new to the site.  I just started looking around because the other day I let my 7-year-old son ride his scooter in our driveway with the garage door and front door open (storm door was closed), unsupervised for 10 minutes or so while I was helping my 4-year-old daughter inside the house.  When my husband found out later he called it bad parenting and irresponsible.  What??? I wasn’t even sure what to say.

I also let my son sit on the porch while I walked around the block one more time, as he was tired and didn’t want to go with me. (His sister and father were in the house.)  My husband proceeded to tell him to get in the house and didn’t understand how I could let him sit on the front porch unsupervised.

We live in a relatively quiet suburban neighborhood.  I feel a little shaken right now and need a little support that I am not crazy for letting him have a little freedom.- Normal Mom Feeling Abnormal

Okay, readers! Support away! She needs it and, frankly, so do I. It is hard to calm a hysterical society. – L 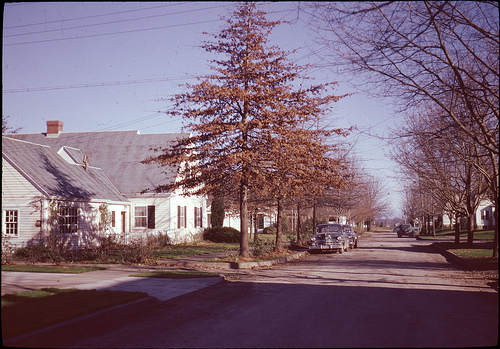 Aren’t kids SUPPOSED to play outside in the suburbs? Isn’t that why parents MOVE THERE?

Wow, This Hasn’t Happened in Like, 30 Seconds: Boy Suspended for Toy Guns
CPS, Sesame Street and Six-year-olds Outside

78 Responses to I Let My 7-y.o. Sit on Our Stoop, Unsupervised. My Husband Said, “That’s Bad Parenting!”