Hi Folks! After years of trying to figure out how to get kids back outside, playing together — an effort that led to “Take htfrsdzdsk
Our Children to the Park …And Leave Them There Day,” not to mention many a blog post extolling the benefits of free-play — I’ve finally decided that maybe the answer is the one that parents look for instinctively: A bona fide class. Hence, “I Won’t Supervise Your Kids,” a new, 8-week, $350 after-school “class” starting this Wednesday, Sept. 12, in New York City’s Central Park. (Details here.)

I’m charging for the class to make me a living, of course! (Though scholarships available simply for the asking. The more kids the merrier!) But I also hope to make playing seem at least as as legit and important as any of the other classes parents sign their kids up for. Because it is. Time spent with other kids with no agenda, coach or trophies, is something fantastic for kids. It’s also increasingly rare, as children’s “free” time is scheduled, or at least supervised (sometimes up the wazoo). So they never get to experience making up a new game, or organizing teams, or even just figuring out how to have fun without someone telling them what they’re supposed to be doing.

The class is open to anyone 8-18, because that’s another thing many kids no longer get: A chance to play with kids NOT their same age.Â Here’s my piece on Lisa Belkin’s Huffington Post parenting blog about the whole thing.

I really love the idea of kids cavorting in the park the way my own kids got to do this summer, when we were in a cabin community upstate and the kids just spent their time Â wandering around in packs, sometimes bored, sometimes playing, sometimes making up songs and sometimes (okay, often) looking for cookies. Then they’d go back out out again. Sort of like bears. 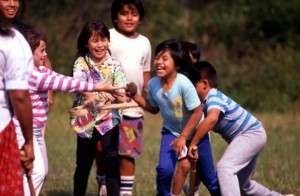 Bringing back that radical activity known as “free play.”

i won't supervise your kids, Take Our Children to the Park

Parents of Kids who Get Too Many Bruises May Be Charged with Neglect
“Who would leave a 10 year old in the library in these times?”

35 Responses to “I Won’t Supervise Your Kids” — My New Class, Starting Weds. in Central Park