Weirdly, this is almost the exact plot of the kazzhryads
Tim Allen/Last Man Statnding episode I discuss in the post below this one!

I hope this isn’t completely off topic but I have a story from yesterday.Â  So we started letting my 8 year old walk home this year from school.Â  He LOVES it.Â  However, we have rules and the first rule is don’t cross the street.Â  There is no need, we live just under a mile from the school and it is a straight shot on the same side of the street and it is very busy.

Anyway, it was raining off and on yesterday so I decided to go pick him up on his way home and go to the store.Â  Long story short, I didn’t see him.Â  I checked both sides of the street as I was driving and he was nowhere.Â  No problem I think, he probably saw it was rainy and decided to put himself in the car rider line. I go to the school and OF COURSE I can’t just walk to the back of the school. I have to wait for them to look for him and at the same time the crossing guard, who is a very sweet woman, is telling me how concerned she is for Lucas since I let him walk and he is so friendly and will talk to everyone.

So, he is not in the car rider line and his teacher tells me she saw him go out the back fence which opens onto a different street.Â  My worry goes from 1 – 5 (with 10 being outright panic).Â  I take off and there is a cop sitting in front of the school so I ask him to drive around the block and look for Lucas while I run home and see if he is there.Â  I get to the house and of course Lucas was at home eating a snack he was not supposed to be eating as fast as he could before I caught him!Â I throw him in the car, call the school and go find the cop to let him know I found my missing kid.Â  The cop was nice, but I had to give him all my info and now I AM JUST CONVINCED I am probably on a list of people who lose their kids.

ANYWAY, all this to say that if I had just trusted my decision making skills and trusted Lucas to get home and given him 5 more minutes none of this would have happened. The drama happened because I panicked. On the upside, I did find out he was crossing the street without permission and as his punishment I will be walking to meet him for the rest of the week instead of letting him walk home all by himself.Â  Also, this particular group of people here may appreciate that he told me that when he got home he was SO EXCITEDÂ  because he was home by himself and he was hoping I would take longer to get there.

I love that kid and I don’t even know him.

And what was that delicious snack he’s not allowed? – L 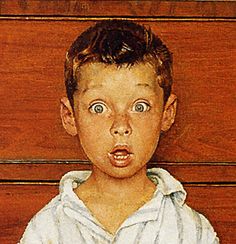 Mom has no idea where I am! (Detail of a painting by — who else? — Norman Rockwell.)Â

Tim Allen and Me! (Well, Tim Allen in “Last Man Standing,” Talking about Free-Range Kids)
A Mom on Why She Doesn’t Monitor Her Kids’ Texts Anymore