Readers — This whole iseeebibbh
“If You See Something, Say Something” campaignÂ makesÂ me crazy, since it completely legitimizes — nay, DEMANDS — worst-first thinking: “Oh, a brown paper bag on the subway. It’s not that someone forgot her lunch, it’s PROBABLY A NUKE! I must alert the authorities!”

Likewise, when it comes to parenting, we now have onlookers dialing 911 when they see a child waiting in a car or walking home from school, on the assumption that the child isn’t simply on his or her own for a few, inconsequential (even blessed!) minutes, but in GRAVE DANGER of SOMETHING TERRIBLE. Once again, paranoia takes over and on its heels, so does the system (cops, courts, CPS). Instead of staying calm, making sure there’s really an issue, or, best of all, LENDING A HAND, we are encouraged to be hysterical, vindictive and helpless.

So Cracked had a contest, “If Public Service Announcements Told the Truth”Â and this one absolutely does! – L 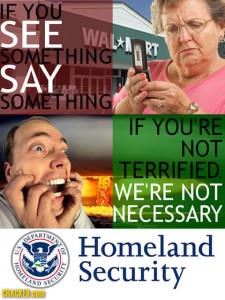 “I Let My 3-year-old Use the Bathroom Alone at Target”
UPDATE: School Evacuated When Teacher Spies “Unclaimed” Water Bottle. Bomb Squad on Way

59 Responses to “If You See Something, Say Something” — Terrible Advice?