Readers adzrbdkdtd
— This is a piece I wrote for the New America Foundation that got picked up by the Atlantic. Thrilling! I am very hopeful that Â if schools start endorsing this project, it sends the message to parents and the community that Free-Ranging is more than legit. It’s transformative for everyone involved. PLEASE SPREAD THE WORD! – L. Â

Silicon Valley Parents Send Their Kids Back to 1972, by Lenore Skenazy

Most school field trips are to places the students might never go on their own: A museum, a play, a nature preserve. The idea is to open kids wide to the wonderful world. This past spring one grammar school in Silicon Valley started sending kids to a very different, but equally mind-blowing place: Their ownÂ neighborhood.

That’s not just sad, it’s a radical new norm: childhood spent under constant adult supervision, and, often enough, in a car…. Considering the crime rate today is LOWER than when most of those parents were growing up — it’s back to the rate it was 40+ years ago — why shouldn’t kids be doing anything on their own? At least, kids in neighborhoods not wracked by shootings and drugs, where going outside unsupervised presents a real danger? That’s where the Free-Range Kids project comesÂ in.

Quick backstory/disclaimer: The project is named for my book and blog, Free-Range Kids, which I began after a column I wrote for The New York Sunâ€”â€œWhy I Let My 9-Year-Old Ride the Subway Aloneâ€â€”went viral. A sixth-grade New York City public school teacher read it and asked me to visit with her students.

Meantime, she gave them the assignment: do something like Lenoreâ€™s son did. Something on your own that you feel ready to do. Just first make sure your parents approve! And so her students did great things: They took their younger siblings to soccer, made dinner for their familyâ€”one kid even got herself out of bed and to the bus stop on her own, no prodding, after years of making her mom beg her to get up and get going. And after that breakthrough day? She got up on her own every morning….

My favorite kid decided his project would be to pick up his younger brother. So when school let out, he hopped on the city bus — first time ever on his own — and started the ride. But — nothing looked familiar. In fact, things keep looking weirder and weirder. He had no idea where he was going and, as he admitted to the class, finally he got so scared “I was ready to scream at the busÂ driver!”

Instead, he held it together and asked the bus driver what was happening. The driver said, “Oh! You meant to go downtown but this is the uptown bus! All you have to do is get off, go one block over, and take the bus going the other direction.” He gave the boy aÂ transfer.

As he was telling the class this story, the boy said, “Actually, I still have it.” He got out his wallet and showed us the slim slip ofÂ paper.

“Why do you carry it with you?” I asked. After all, it represented a day of terror and humiliation. (I didn’t put it that way.) The boy just shrugged. But then, of course, I realized what the transfer reallyÂ represented:

Freedom. Independence. Courage. He’d been scared out of his wits, on the verge of a very public tantrum, but he had triumphed. The transfer was proof. His golden ticket! It gave him the confidence to go anywhere from now on, because he knew that even if he screwed up or felt scared, he’d beÂ okay.

“Now imagine if his mom had come with him,” I said to an auditorium full of Silicon Valley parents at a lecture I gave there last spring. “She’d have gotten them on the right bus, no problem. Would the boy remember thatÂ afternoon…forever?”

Afterward, the administrators at Oak Knoll, one of the local grammar schools, came up to me and said: We want to do a project likeÂ that.

Oak Knoll’s theme for the year was confidence and clearly the Project dovetailed perfectly. So the school sent its 700 parents an email announcing the undertaking, along with some materials by me saying basically the same thing you’ve just read: Kids don’t get a chance to do much on their own, but when they do, it changes them. So why not encourage your son or daughter to do a completely voluntary, ungraded Free-Range KidsÂ Project?

I don’t know how many kids begged their parents, “Pleeeeease!” but about a third of the parents signed on and, reports co-principal Kristen Gracia, “It was a huge success.” With the school’s endorsement, even anxious parents were willing to loosen the reins a little. They let their kids ride their bikes to the park, play at the playgrounds unsupervised, take hikes, bake cookies, run errands — for a couple weeks, the highest tech place on earth was a throwback toÂ 1972.

“This has really changed our lives!” wrote a mom named Gina on a post-project survey the school sent home. She’d allowed her fifth grade son to go to the store by himself and when he came back quickly, as she’d requested, she had proof positive that he was willing to be responsible. Since then, she wrote, “Almost all that we do now is an opportunity to be Free-Range. We did many ‘Projects.’ He baked brownies alone, he comes home now on his bike after school, and he is responsible for his swim bag (if he forgets his wet suit, oh well — soggy, cold and wet for practice!). ThankÂ you!”

A third grader’s project involved talking to the cashier in a shop (okay, the American Girl store — look, it’s Silicon Valley). She’d never done this on her own before but the whole thing, she wrote, “Went great and fast!” Her mom, Melissa Engelkemier, added that she could see the effect on her daughter’s confidence, even at school. “Before, there were a couple of times people had asked her if she wanted to do a book review on KNOL” — that’s the school’s closed circuit TV show. “But she’d said no, because she was too nervous. But afterward, she was asked to do an announcement of the volleyball game, and she said she felt she was brave enough to make the announcement to the wholeÂ school.”

The project was so successful in so many homes — “Thank you for organizing this!” wrote one mom. “Can we do it more often?” wrote a dad — the school will be doing it again thisÂ year.

“It’s like we provided them a new lens to look through,” says co-principal Gracia. “Even parents whose kids didn’t do the full project started asking themselves, ‘Why am I afraid? Is it something I really need to be nervous about?’ It was veryÂ powerful.”

The Oak Knoll kids went to 1972 and came back changed. That’s a field trip they won’tÂ forget. 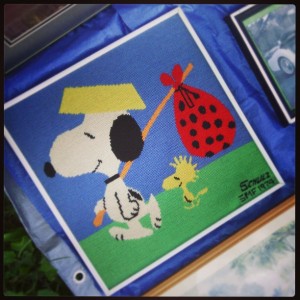 Kids, you’re going back to my childhood today.Â

12 Responses to IMPORTANT! The Free-Range Kids Project for Schools