Melissa byrikafdbr
James is a 38-year-old copywriter in Yorktown, VA, wife of a Department of Defense analyst and mother of two who decided to do something a little…wild:

Dear Free-Range Kids: I enjoy your website and had declared myself a Free-Range Parent about a year before discovering you. (I had adopted the term after reading the articles about the kids walking home from the park whose parents kept getting reamed for “negligence.”)

Anyway, very few kids in our upper-middle-class, very safe neighborhood are ever seen outside. People know my twoâ€”Audrey, 7, and Preston, who turns 10 today — because they are always out in our short street’s cul-se-sac. And yes, several neighbors have complained since they’ve been playing there for four years or so. This includes one middle-aged woman whose 26-year-old son still lives at home, but thinks she is giving me good “advice” to keep my kids locked inside…?

So upon reading about the Free-Range Kids Project, I decided to indulge Audrey’s repeated requests to ride her bike to a friend’s house who lives a mile away, within our neighborhood but on the other side. I had been concerned about getting calls from police (but not for her safety, in our aforementioned haven of suburbanites and my daughter’s excellent riding skills and helmet). I realized that I would have to take the risk of busybodies butting in if I was going to give my daughter the independence she needs and craves.

I hand-wrote directions for her, with the street names and turns, and drew a crude map, then sent her on her way. She made it there with no problem and loved the adventure! My only mistake was not thinking to writer her out directions back home. Oops. The neighbor helped her though, as good neighbors tend to do (hence why people move to neighborhoods, right?). All was well. Next I’d love to get our school to try out the project! — Melissa L. James

Amen to getting schools on board. Please refer them to this article explaining the super-simple, super-life-changing Free-Range Kids Project for Schools.

And yes to the Melissas out there: It really is that easy to start giving kids back their freedom. The only hard part is letting go that first time. Try it and tell me how it goes. – L. 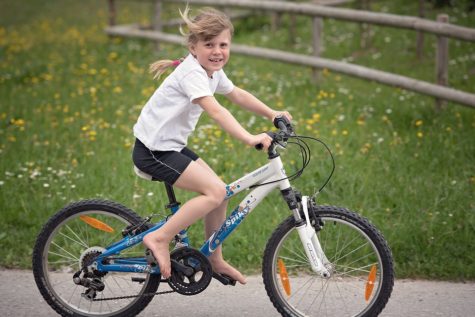 It is really easy to let your kids walk or bike on their own — the second time.

“Children of Any Age Should Not Go Into Public Restrooms Alone”
Predator with a Popsicle? Our Crazy Fear of The Ice Cream Man

46 Responses to It Is Really Easy to Let Your Kids Walk, Play and Bike Outside — The SECOND Time