Readers, I am thrilled that Andrea drfbnnbkds
Peyser had the guts to put our kids-waiting-in-cars hysteria into focus. From her column today:

“We’ve become hyper-fearful about any children being left alone for even a second,’’ said Lenore Skenazy, a public speaker and author of “Free-Range Kids, How to Raise Safe, Self-Reliant Children (Without Going Nuts With Worry).’’…

“What we’re seeing this summer, parents who make a rational decision to let their kids wait in a car for a brief period are treated as if they’re leaving them in the Mojave Desert with an empty Dasani water bottle,’’ Skenazy told me.

After mentioning the case of Justin Ross Harris, and the fact that 19 children have died of heatstroke this year, Peyser  went on to point out (boldface mine):

Then, there are cases like this one: Police in Bristol, Conn., last month slapped a misdemeanor charge against Christina Williams, 30, of leaving a child under 12 years old unattended in a car, after a passerby with nothing better to do alerted authorities that Williams’ daughter was alone in a vehicle. She was 11!

…KidInCars.org, whose members oppose children being left in cars, estimates that 45 kids have died this year after being backed over by vehicles in places including driveways and parking lots, and another 23 were killed after cars rolled over them while going forward. Also, 265 child pedestrians were struck and killed by cars in 2011, according to the National Highway Traffic Safety Administration.

“So kids are more likely to die when taken out of the car than while waiting in it,’’ said Skenazy.

I don’t know of another journalist, aside from 20/20’s Elizabeth Vargas, who has had the balls to make the case against kids-in-cars hysteria so boldly. I salute both these ladies. – L. 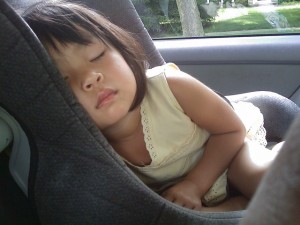 Mom Invents App to Disable Kids’ Phones if They Don’t Answer When She Calls
12-Year-Olds Need a Babysitter?

34 Responses to Kids More Likely to Die OUTSIDE of Cars than Waiting IN Them: New York Post