I’m thrilled and worried when these zazynidfin
stories make the news (via CTV): A Winnipeg mom was doing the dishes while her three kids, 10, 5 and 2 , played in their fenced-in backyard.

A neighbor called to report “unattended” kids frolicking and Jacqui Kendrick was visited by a child protective services rep. The rep asked questions about what Jacqui’s own childhood was like, how she punished her kids, and where they slept. She even looked in Jacqui’s fridge.

Happily, the shrink that the CTV reporter interviewed for some perspective pointed out that neighbors should complain to each OTHER, not to the authorities. And what’s more: it’s crazy to give credence to simply every call CPS gets.

That, perhaps, is the crux of the matter. The easiest way to feel smug and/or muck up someone’s life is to call CPS, say, “So and so is abusive” and hang up. And yet we allow that — and the caller gets to remain anonymous!

The system seems to investigate every call, even ones about kids Â “neglected” in their own backyard. (Pause for a shout out to the Family Defense Center in Chicago, which has been valiantly fighting this trend for over 20 years.)

So why does a dismaying story like this thrill me? Because the more we hear about these Kafka-esque assaults on families — and especially on children playing — the more we resolve: This has to change. So does the Manitoba law quoted in the piece that says a child age 12 can be left home unsupervised. Â What about younger kids, whom the parent trusts? Is that illegal or simply frowned upon? How selectively is the rule enforced? 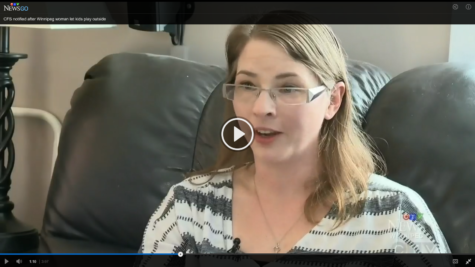 Crazy mom allows kids to play outside. Call the authorities! (But don’t press the “play” button — it’s just a screen shot. The actual video is above.)Â

How Our Autistic Son Ended up a “Sex Offender for Life”
Mom Investigated for Letting Son, 38, Live on Own

70 Responses to Kids Play in Backyard While Mom Does Dishes. An Investigation Ensues