Readers ehabzkesrf
– Before you read this, let me say that I am eagerly awaiting a call later today from a lawyer whose organization fights for parents’ rights to raise their kids as they see fit, so long as they aren’t hurting them. In the meantime, here’s why we need a group like that:

Dear Free-Range Kids:Â Â I’m having a hard day, and wanted to touch base with you.

I still send my kids to the playground down the street regularly (for the record, it is 350 meters from my house… not exactly far). Nothing around here has changed.

Unfortunately, last week, my kids were at the playground on their own, as usual, when one of the local cops was in the area following up on a call about some creepy guy hanging around the playground. Now, I’m not sure if anyone called specifically about my kids (I did suspect as much at first, but now I’m not so sure), but he did notice them, and after investigating a little, including trying to call myself, my husband, and our roommate (none of whom answered, due to the “blocked” label on the call display, and the fact that two of us were working), he eventually brought them home. Now, Alberta law states that if the police are involved in anything to do with children, that a report must be filed with Children’s Services, regardless of the personal beliefs of the officer (once he was informed about our parenting style, he fully understood, and was fine with it… was mostly concerned about the creepy guy).

Â Well, I got the dreaded call this afternoon, and it’s really taking the wind out of my sails. I had a lovely (read: firm) discussion with the worker on the phone, that ultimately ended with her not knowing what to say to me, and stating “we’ll have to continue this conversation later”. I informed her that my opinion would not change, but she repeated the last statement, and ended the call.

Â I know in my heart and in my head that I have done nothing wrong, but when Children’s Services has a habit of labeling parents based on next-to-no information, to the point of removing the children with no just cause, I can’t help but get a little stressed out about it… especially when I work (both paid, and volunteer) with children, and this could potentially put a big ol’ black mark on my background check.

Â I will fight with all my heart and soul for my right to raise my children Free-Range. I will not by stopped by this. I will not live in fear. But I might need some help with that fight.

I’m thinking I should start compiling resources that support my stance, both legally, and scientifically, in case I need them later. I know at least in Alberta, there is no legally-binding “magic age”, despite the crap that she kept spouting on the phone (“we believe that children under 12 should not be left to supervise younger children”, “we believe that 8 is not old enough…” etc etc), but I would like to make sure I have that in black-and-white. I’ve read most of Dr Peter Gray’s blog, and will definitely include a lot of that in my collection. Are you aware of other resources that I could take advantage of? I know there’s others, I just can’t think straight at the moment.

I appreciate you taking the time to read this, and I understand if you don’t have time to send anything other than moral support. I just needed to vent to someone who would understand.Thanks again -Â A.

Dear A. – First of all, we are ALL with you in that fight. Secondly, while it may feel like Child Protective Services is removing kids from decent homes all the time, I think the threat is far larger than the reality. Even at my perch here, I’ve only heard of a handful of cases (in the course of five years) when that happened. Investigations? Yes. Tense times and unwarranted misery? Yes. But child removal? Very rare.

Thirdly, I have a proposal in right now to work with a bigger organization than mine to draw up a list of “What age?” answers that I hope will be endorsed by a blue ribbon panel of experts, to the point where it DOES become admissible in court — and hung on every refrigerator. I will keep you and other readers apprised of that effort.

Finally, the main issue here is that this is not a case where CPS should be involved at all, which is one of the things Free-Range Kids exists to fight. It is not only our right as parents to raise our kids as we see fit and wholesome, it is also our KIDS’ right to play outside, unsupervised. As the wonderful Peter GrayÂ you are reading also taught ME, play is crucial to making kids into decent adults. Every generation until the current one has been allowed to play on their own, so considering it wrong is a RADICAL new outlook on childhood. Unsupervised play is not a crime, it’s not unduly dangerous, it’s a lot healthier than just sitting “safe” inside. Â – L 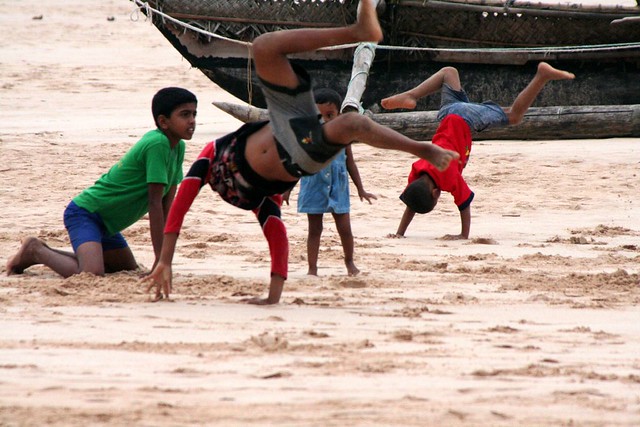 Let’s keep this legal! (Photo by shyam, via Flickr)

Listening to the Radio
Help Needed: Your “I Let My Kid Wait in the Car” Stories!