Hi Readers — Here’s tzfeddfbbk
a cool study from Loyola University about something that doesn’t surprise me at all: The more that kids play on their own, the less likely they are to get injured while playing their organized sports.

A press release about the study was titled, “To Protect Against Injuries, Young Athletes May Need to Play More Just for Fun.” It says:

One way to avoid injuries in young athletes may be for them to simply spend more time in unorganized free play such as pick-up games, a Loyola University Medical Study has found.

In a first-of-its-kind study, sports medicine specialist Dr. Neeru Jayanthi and colleagues found that injured young athletes who play a single sport such as tennis spent much less time in free play and unorganized sports than uninjured athletes who play tennis and many other sports.

What I love about these findings is that, once again, fun that kids make on their own — i.e., goofing around — turns out to be EXCEEDINGLY BENEFICIAL in the non-goof-around world of organized sports. The same way RECESS — which looks like goofing around — turns out to be BENEFICIAL to students in the non-goofing-around business of buckling down to school work.

Maybe what kids need is a little less over-scheduling and hovering — at least, if we want them to become safer and smarter. – L. 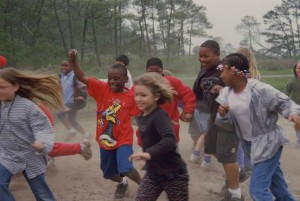 The key to health and safety: Letting kids play on their own!