Readers — When my son was in fifth grade and annoying the teacher one way or another, his punishment was NO RECESS.

Do you think that made him more eager to pay attention, stop squirming and buckle down to work for the rest of the day?

That’s why I’m thrilled that no less an institution than the American Academy of Pediatrics has decided to rally for recess. According to syiddbkytf
this piece by Bonnie Rochman in Time Magazine:

Children need to have downtime between complex cognitive challenges,â€ says Dr. Robert Murray, a pediatrician and professor of human nutrition at Ohio State University who is a co-author of the statement. â€œThey tend to be less able to process information the longer they are held to a task. Itâ€™s not enough to just switch from math to English. You actually have to take a break.â€

The AAP committee that developed the statement began its research in 2007, expecting to discover that recess is important as a physical outlet for children. What they found, however, was that playtimeâ€™s benefits extend beyond the physical. [LENORE INTERRUPTING FOR A MOMENT TO SAY: DUH.] Â â€œWe came to the realization that it really affects social, emotional and cognitive development in a much deeper way than weâ€™d expected,â€ she says. â€œIt helps children practice conflict resolution if we allow them unstructured play, and it lets them come back to class more ready to learn and less fidgety.â€

You’d think that any adult who has ever interacted with a child might have noticed this without a multi-year study. But no matter: Now that it is OFFICIAL and SCIENTIFICALLY PROVEN, perhaps schools that consider recess expendable will realize it’s actually the opposite: Crucial.

And once all the experts get on board with THAT, maybe we can move on to the importance of play OUTSIDE of school, too. Like, you know, at the park, with other kids, while the adults are off working or making dinner. I know that still sounds nutters to most of the country at this point, but now that recess has pediatric legitimacy, maybe plain old playing at the park isn’t so far behind. – L. 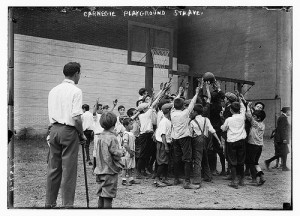 Why Kids Don’t Need Yoga — Guest Post
School Reverses Suspension of Boy, 6, Who Made “Gun” Out of Hand