Readers — To use my friend Gever nfzsbidfia
Tulley’s term, we are geniuses when it comes to “dangerizing.” To dangerize is to take a hitherto normal activity or item and re-interpret it as something dangerous. That’s how we get baby knee pads — we dangerize crawling. And Halloween restrictions — we dangerize trick or treating. And now, a schoolÂ in British Columbia has banned kindergarteners from touching each other at recess:Â According to The Globe and Mail:

Why did the school make the new rule? The [school’s] letter cites playground injuries that have come from games and other forms of hands-on play. The letter also requests that parents discuss the touching ban with their kids and encourage them to play imaginary games that donâ€™t involve fighting.

To quote directly from the letter: â€œWe will have a zero-tolerance policy with regards to hands-on play, resulting in the missing of playtime and trips to the office for those who are unable to follow the rules.â€

I do hope they ban movement next, because kids often get hurt when they walk, run, wiggle, skip or jump. We really can’t expose our kids to that kind of danger. If I were the school, I’d add that any child found playing will result in the missing of playtime. (And isn’t “in the missing of playtime” exactly the kind of felicitous phrasing you hope they are teaching the kids? Maybe they can all grow up to be bureaucrats!) – L.

UPDATE: Read the principal explaining her actions here. She blames some recent “injuries” and says the ban is temporary and touching will be re-introduced once kids learn to play “safely.”

But what is “safely”? Is it when NO ONE gets hurt? Â Is there a way to ever guarantee that, and would we want to?

And why penalize touching, even hand-holding, in order to teach new ways of playing? There’s a difference between shutting down play and teaching kids new, fun things to do outside. Â This rule seems drastic and desperate. – L. 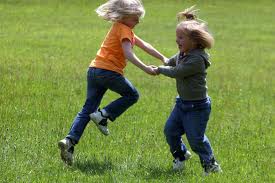 Hey you kids! Cut that dangerous activity out!

41 Responses to UPDATE: Kindergarteners Banned from Touching Each Other at Recess