“A Fargo mom is telling local parents to watch out after an incident at a local grocery store,” intones the anchor.

The yenhefafeh
incident? (And remember my warning about the word incident: Every time you hear it, it means that NOTHING HAPPENED. Otherwise it would be a “crime” or “mauling” or “deadly spider attack.” Incident = excuse to warn about something, period.) Anyway, the “incident” in question was a grocery trip during which the mom got the feeling that maybe she and her daughter were being stalked Â because…another couple kept ending up in the same aisle as them. As she told Valley News Live’s Â Nicole Johnson:

“I noticed a couple that seemed rather close to me. Wherever I went they followed in the same pattern,” she says.

Fearing that they were being stalked, McCloud purposely started wandered to different aisles, watching their behavior. “My mommy instincts were alerted and so I kept an eye on this coupleâ€ she says. â€œAnd I just kept going through the store. And when I went to the checkout they were right there.”

McCloud and her daughter headed for the coffee shop inside the store, sat down and waited until the man and woman left. “It could have been a common shopping pattern or it could have been something a little more sinister,â€ says McCloud.

Um, that is true.

The mom posted about her experience on Facebook and this went semi-viral with other moms posting that the same thing had happened to them.

Now, naturally, the mom is welcome to post whatever she wants. She does seem extremely nice. And maybe it is modestly newsworthyÂ that her post went modestly viral.

What is not newsworthy is treating the mom’s suspicion as valid, even helpful. It’s like when schools send out notices to say, “A van was spotted near a bus stop today.”

And to add a “Mom on the street” interview to the package with someone just blathering about moms and predators and protecting our kids — wow.

You know what it is when a mom feels scared even though nothing happened, and other moms do too, and they all agree that moms love their kids and want to keep them safe even though it’s a creepy world out there?

That, my friends, is an incident. – L 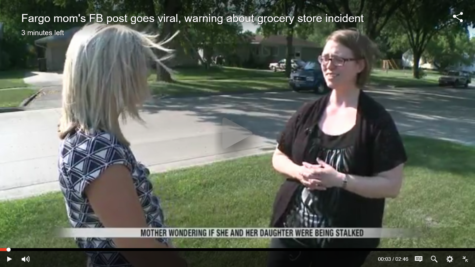 TV reports on a mom who feels she might have been followed at the grocery. Oh my.