This essay, What hsnhedbfrb
Losing My Kids Taught Me About Free-Range Parenting, appeared in The Tennessean. It’s by Maggie Conran, author of the blog nomommybrain (motto: Just Say No to Mommy Brain!).  The piece packs an emotional wallop because we’ve all had that WHERE ARE MY KIDS? experience. In this case, Conran’s  family was at the local woods, the kids asked if they could take a shortcut, and after some misgivings, she let them. We pick up here:

I thought about it for a minute and then said yes. We planned to meet at the Nature Center if we didn’t see each other on the other side of the trail. They tore off down the muddy path, more excited than I’d seen them in a long time, and we went on our way.

As we walked, I only wondered a few times if I had done the right thing. What if one of them slips in the mud? Or gets tired? Are they really big enough for this type of independence? But overall I felt fine. No gut feelings telling me I should worry. No inkling suspicions I had done the wrong thing. No sudden worries about weirdos or wild animals.

When we got to where the two trails meet, the boys weren’t there. I figured they were just taking their time but walked to the Nature Center to check for them just in case. They weren’t there either. So we walked back a bit and I hopped on the Beaver Trail to meet up with them. My friends took the circular trail back the way we came and we planned to reunite at the Nature Center.

As soon as I stepped foot on the muddy path, my stomach lurched into my throat and I started to panic. Where before I was confident the boys could do it, now I knew for sure they could not. The ground was so slick and muddy with patches of ice I could barely walk without falling. And yet, here I was, running, sliding, yelling their names, wondering why in the world I had ever let them go.

The longer I was on the trail, the more terrified I became. They just weren’t there. I tried to convince myself we had missed them somehow but there just wasn’t any way that made sense. If they were still on the Beaver Trail when we were walking to the Nature Center, we would have walked right into them on our way back.

WHERE ON EARTH WERE MY BOYS?

You can read the rest here. But, heck, here’s how it turned out: The kids got a little lost, saw a familiar landmark, walked toward it, and got back on track. Picture a happy reunion with a crazed mom. (The boys weren’t even crying.)

At the time I was so scared and relieved and remorseful and nauseous that I just held my boys tight and got us all safely to the car. All I could think was that I shouldn’t have let them go. Why did I let them go? It was a bad call. A mistake. I was overflowing with regret.

On our short drive home Finn piped up from the back seat. Muddy and smiling he said, “This is my most luckiest day!”

“Because we found you!”

It took me several days to accept that he might be right.

Nothing bad actually happened. It was awful — don’t get me wrong — but only because of what I thought might have happened. What really happened was pretty great. The boys had an epic adventure. They stuck together. They used their brains and their feet and they did what had to be done. They were beyond resourceful. Scared but brave. I honestly don’t know how they did it without freaking out but they did. And honestly? I think they’re better for it.

I, on the other hand, would just as soon die than experience that again. But I guess that’s sometimes how it is with letting go. With parenting. It takes guts. More guts than we have sometimes.

Reminding ourselves that mix-ups and mishaps are normal is one aspect of Free-Range. Of course the whole road won’t be smooth. What is? (Besides a smoothie.) If everything had gone as planned that day, it would be have been forgotten in the miasma of normalcy. Instead, it’s a day the kids felt grown up — and did grow up.

That IS a lucky day. 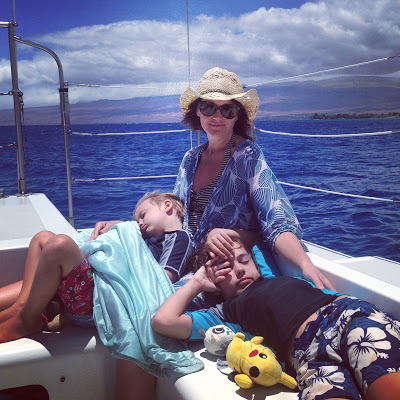 Conran and her boys, safe and sound. (But on a BOAT! ANYTHING could happen!)

Another 19 y.o. Had Sex w/ Girl He Thought Was 17. Now He Cannot Be Near Anyone Under 18 — Including His Brother and Sister
When the Desperate Parents of Very Sick Kids are Accused of “Medical Child Abuse”

29 Responses to Lost in the Woods