A few days ago a man in Winnipeg walked up to a lemonade stand run by five kids and gave them five $20 bills. He also handed them a card of his.Â Here’s htkrserbhe
how it unfolded in the press. Toby McCrae, mom of one of the l’il lemonade entrepreneurs, heard from her son that:

Along with fiveÂ $20 bills, the man also handedÂ the boys a business card for an anti-tax website promising to educate members about their rights.

On the back of the card, written in blue pen, was a note about how to make moneyÂ “with your own society.”

McCrae looked up the man’sÂ website and immediately felt it was strange and unusual. She called Winnipeg police, took the money from the kids and asked them to shut down their stand.

Her son later saw the same man get into a white van a block away.

In fact, the white van was such a clichÃ© that it turned out not to be true. As did the idea that this was anything more creepy than kids meeting an adult who considered them worth talking to — and perhaps opening their minds.

Recognizing that he was the man in this story, yesterday Marcel Bessette went to the press:

Bessette said he never got into a van and wants to set the record straight about the incident toÂ put parents’ minds at ease.

“I don’t want them thinking there’s a predator in the neighbourhood when there’s not. I mean there might be but it’s not me,” he told CBC Monday.

Bessette is a member of the Peace Maker Society â€” a group that doesn’t believe in paying taxes â€” and said he simply wanted to spread that message while supporting the young entrepreneurs.

“I just walked up, told them it was for the lemonade stand, that I was proud for them for being entrepreneurs, that I’ve run stuff through my life and here’s 20 bucks each and a card so you guys can learn with your family.”

Now that that’s cleared up, we’re all done, right?

Winnipeg police spokesman Jay Murray said the incident is troubling and while not illegal, police want to talk to Bessette.

“It’s one thing for him to approach an adult and kind of communicate those beliefs, but I don’t think it’s appropriate for him to talk to minors about this,” he said.

“You can’t be doing this kind of thing.”

“This kid of thing” being…talking to kids? Supporting their initiative? Giving away one’s own money? Isn’t that basically what Santa does, year in and year out?

The police do not need to be involved in any child-adult interaction that is not illegal and not nefarious. Go chase a real criminal. Â – L. 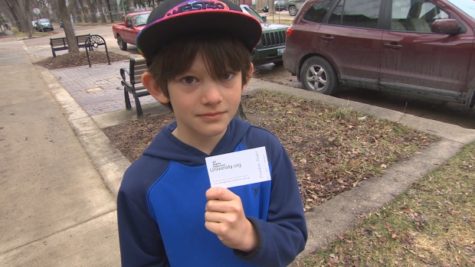 Toby McCrae’s son, James Krieder, seemingly less and less pumped about the $20 each a stranger gave him and his four lemonade stand entrepreneurs. (This photo was provided to the CBC by McCrae.)

Boy Dies in Rotating Restaurant Tragedy. I’ll Bet You Can Guess What Happened Next
Dad and His Daughter Hauled Off Plane because Passenger Assumes He is a Sex Trafficker

98 Responses to Man Gives $100 To Kids at Lemonade Stand, Police Want to Talk to Him