Ah, readers, here’s a wild story of  a busybody gone batty: Seeing a toddler left alone in a running car, some nut stole the car AND baby because he was “upset” with the dad for leaving the kid alone.

But as the reader who sent this story to me, Michele, dryly noted: “It seems to me that the only person the child was in danger from was the guy who took him as a ‘lesson.'”

The story is here. ddkarfbaft
And while I don’t like the idea of a car with keys AND a kid in it, the dad most certainly did not deserve this kind of fright. Any onlooker who was  truly concerned could wait till the parent came out and have a friendly chat. Generally speaking, chats beat kidnappings. – L 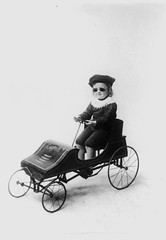