Hey Readers! It turns out we’re not the only folks disgusted by the story bkkdyafzbd
highlighted here yesterday describing the “characteristics” of a pedophile (basically: anyone who’s male and has ever been near a kid). Apparently the fear-mongering has upset an entire continent: Australia, where it was published. One blog tore the piece apart thusly:

Child abuse advocates and experts have rubbished Australia’s most-read website, news.com.au, for running a story advising readers how to spot a paedophile. They say the checklist was inaccurate, irresponsible stereotyping.

The article, published yesterday, warns the reader of nine different “types” of child molesters and the behaviours they supposedly exhibit. These behaviours are as varied as being a teacher, dating a single mother or simply being overly eager to babysit.

Social media went berserk in protest and forced news.com.au to expunge a passage recommending people not allow child abuse sufferers near their children.

“Paedophiles are often the victims of child molestation themselves. If you know this about a person’s past, beware. It’s all very well to feel sorry for a person, but don’t let them anywhere near young people you know.”

That passage has now been removed, with no acknowledgement from the site. A short biography was also uploaded, claiming Sutton has decades of experience covering the crimes of sex offenders.

It’s thrilling that this kind of “Male = Molester” drivel is being taken to task. I’m not sure that would’ve happened a few years ago and I am feeling rather heartened. And I’m not even an adult male who likes kids! – L. 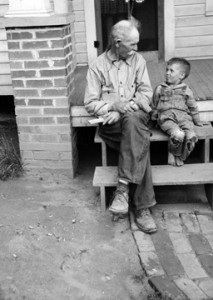 It’s possible this man is NOT a threat to this child.

22 Responses to Maybe Some Men are NOT Child Sexual Predators?