Hi Folks! A reader writes: “Thought you might be interested in fkieeanats
this ‘How to Spot a Pedophile’ list, which enraged me. It narrows down the field of potential pedophile suspects to ‘any adult male who has ever had contact with children’. As somebody who ticks several of the boxes here (worked with kids, babysat for friends, among others) I’m enraged that those things somehow make me a suspect.”

While we always stress here that it is GOOD to teach kids to understand how to recognize, resist and report sexual abuse, it’s also good for parents to understand that just because we are now keenly aware of the problem doesn’t mean it’s happening more than before (studies show it’s actually happening less!), or that all kids are in danger any time they are around MEN.

The article makes a valid point that abusers don’t necessarily look like creepy strangers. BUT it suggests that we treat with suspicion, even revulsion, any male who evinces any interest in kids. This is a distorted and actually perverse way to look at half the population. And God forbid a guy actually volunteers to help out!

As a mom who has hired male babysitters, I’m sickened to think that the really nice men we employed would be treated as guilty until proven innocent (and how, by the way, does that work? How can you prove a negative?).

Hope that clears things up! – L 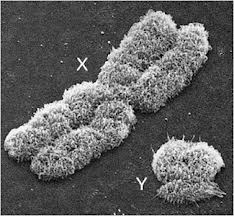 Watch out for anyone carrying an XY chromosome!

Free-Range at Disney World
Maybe Some Men are NOT Child Sexual Predators?

55 Responses to “Could You Spot the Pedophile?” Hint: He’s Male and Breathing