Readers — I find this storyÂ by Colleen Creamer flabbergasting: A grandmother in the tiny town of Charlotte, TN, allowed her four grandkids, ages 7 – 12, to ride up and down her street. For this she found herself in violation of a 2003 city code that declares no one can “ride an all terrain vehicle, skateboard, roller blades and roller skates or conduct similar activities on city streets, in the city park or on the Court Square of Charlotte.”

While that Grinch-y Â list doesn’t mention bikes, Mayor Bill Davis told The Tennessean paper that it was “absolutely” true that bikes are forbidden, too. He explained his rationale thusly: “If one of them gets hit, who’s going to be responsible for that kid?”

The major went on to complain about younger kids playing and riding their bikes, ignoring the fact that these particular kids were all age 7 and up. According to the paper, the mayor alsoÂ said he thought that most other towns in the county (Dickson, TN) don’t allow kids to ride their bikes on the street, and that hisÂ town gets a lot of complaints about kids playing.

Maybe that should be Charlotte, Tennessee’s motto: “Where people complain when kids play.”

In this case, the grandparents happened to BE outside. But, “You can’t just let kids be out there unsupervised,” said the mayor.

Oh yes you can, Mr. Mayor. As nutty as this country sometimes seems, there really isn’t a law against kids playing.

Maybe your town can be the first! – L. 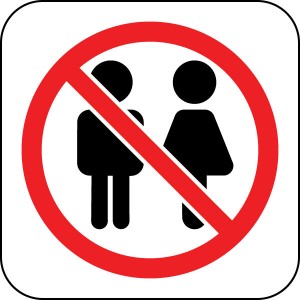 We love our kids! (Just not outside, biking or playing.)

Oh Yes, Mr. Marketer, We are ALL Afraid Our Kids Will Be Snatched
Background Check the Parents of Your Kids’ Playdates, Urges Ad

71 Responses to Mayor of Small Town: Kids Not Allowed to Bike on Streets Here