October 9, 2014
Readers, feenzhaniz
this comes to us from Tiffany, who calls herself “a nomadic mom of 11 & 12 year old Free-Range boys traveling the USA via RV.” How cool is that?

Dear Free-Range Kids:  My late father’s occupation, and love, was teaching mobility to blind students. He was employed by the school district and taught blind, k-12 students how to move about in the community. The “classroom” consisted of busy intersections, the mall, the post office, and many other places. He had been doing the work for 35 years and had seen society change so much.

During the last 10 years of his career (1997-2007) he prepared himself for police calls, when “vigilant” neighbors would see a man outside with a child during school hours. Police would show up, question my dad and the child, and them send them on their way. He carried his credentials with him. Once, the police told him that a call had come in about a “child predator” that had been seen with different children in the neighborhood (the neighborhood near one of the schools where the majority of district blind students attended).

The last two years of his career, the district pushed my dad to move all of the “lessons” to the school campuses. This was so frustrating, because you cannot recreate busy intersections and shopping on a campus.

The parents of the blind students often offered to pay my dad to work with their child during off hours so he could truly teach the kids to navigate the world. Another note, not once did the other teacher, a woman, get stopped by police when out with a student. So, my dad was seen as a “predator” just for being male as well.

Really, at first my dad wasn’t bothered by the calls because he appreciated people “caring enough” about the kids to question it. It did wear him down though. I recall his frustration over being presumed guilty simply because he was a man with a child.

The idea that predators are out and about with their “prey” all the time, sauntering around town, is one of the most bizarre and pernicious of our era. Last night I had dinner with Peter Gray, author of Free to Learn (which I HIIIIIIGHLY recommend) and he told me about the time he’d taught his daughter how to bike and then was putting the bike back in the car to drive them back home. An onlooker mistook him for…well, see above.

We have de-normalized the idea of men interacting with kids except to kidnap and rape them. That’s perverted. – L 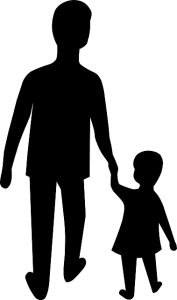 Officer, there’s a man with a child going by!

A Threat Made to School: How Would You Respond?
About to Give Birth and Already Sick of the “Pay More Attention to Your Baby!” Guilt

61 Responses to Mistaking My Dad for a Predator