A New Jersey mom is facing charges for leaving her kids, 8 and 10, in the car while she ran an errand.

As it happens,while she was doing the shopping, a ssetdbehyb
man hopped into the SUV, which was still running, and drove off with the kids. He crashed the thing, and everyone ended up bruised but okay.

Except the mom, who is being treated as if she’s a criminal, too. Possibly that’s because of the nature of her errand: She was at a liquor store, at night.

1 – There’s no evidence she was going to drink and drive. Even good parents (some of the best) buy liquor.

2 – There’s no reason to think that kids 8 and 10 can’t handle themselves, except in the rarest of rare situations — like this one. We are allowed to consult real-world odds when making our parenting decisions.

3 – Just because this errand ended up crazy — a car heist, a crash — doesn’t mean parents should be expected to dream up this kind of worst-case scenario before they make the safe but never PERFECTLY SAFE decision to leave their kids unsupervised for a short time. We get the idea that kids are never safe unsupervised precisely because this is the kind of story that makes the news. We never see the boring stories of millions of kids waiting in millions of Â cars until mom comes back and life goes on, unremarkably.

Punishing the mom is wrong. Punish only the perp! (And I would argue that it doesn’t even make sense to punish him as a kidnapper, since it appears he was trying to steal a car, not kids.)

And yes, yes, yes, it’s far better NOT to leave the car running. But just because you make a dumb decision every once in a while does not mean you are a criminal. In fact, that is exactly what the NJ Supreme Court ruled recently about another mom, another car, and another kid. – L. 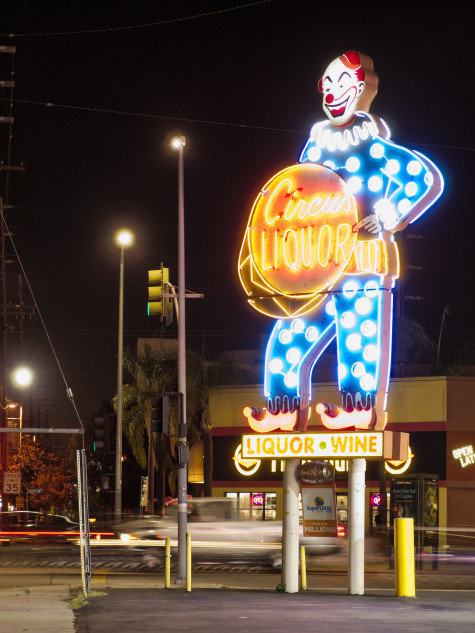 This has got to be the weirdest liquor store sign available on Google Images. Also, please read the story above, which is about our vindictive desire to punish imperfect parents, not about amazing neon signage. (CREDIT: OLYMPUS DIGITAL CAMERA)

Verdict Reversed! Mom NOT GUILTY of Neglect for Letting Kids, 11, 9 & 5, Play in Park Across the Street
An Adult with Possible Autism Is Grateful for Her Free-Range Childhood

80 Responses to Mom Has Kids, 8 and 10, Wait in Car — Now She’s Charged with Abuse and Neglect