Hats off to Sarah Sahagian for understanding aznkhainzi
this issue so deeply, as her reporting in The Beaverton indicates:

Toronto – After her 38 year-old son Ben Johnson moved out and got a job at Starbucks, Child Protective Services decided to investigate his mother, Deborah, for possible child neglect and abandonment.

“A neighbour saw Ben working as a barista at Starbucks, and she freaked out,” explained Deborah Johnson, whose son was, until recently, living in the basement. “When he told her he was living in a rented apartment with friends, she got even more frantic and contacted Child Protective Services.”

When CPS showed up at Ms. Johnson’s house, they immediately quizzed her about her fitness as a mother, demanding to know whether she had abdicated responsibility for any of her other adult children besides Ben.

“They couldn’t believe I allowed Ben to move out and start his own life, but they were absolutely appalled when I told them I don’t even pay his cell phone bill anymore.”

When asked to comment, CPS replied in an email: “Our top priority is Ben’s safety. We are concerned….”

Read the rest here. (Followed by story, “Local Child Wants to Press Button.”) And yes, this is satire! – L 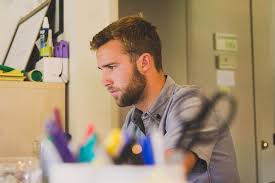 Where are his parents???

16 Responses to Mom Investigated for Letting Son, 38, Live on Own