This insdiadyre
is a great article in the Washington PostÂ by Allison Slater Tate that clearly lays out the real threat of giving our kids a way for us to get in touch with them all the time.

It drives parents crazy with worry.

Now any time we CAN’T reach them, we worst-first: Why isn’t he answering? Where has she gone (or been taken)???

That is exactly what Pope Francis was warning the world about when he said that caring for kids does not mean watching or being with them constantly. Once we are omnipresent, not only does the child never get independence, but we ourselves come to believe we can and must control all that a child encounters. Which is impossible. And crazy-making.

In her essay, Tate writes about a time her 13-year-old didn’t get off the school bus and wasn’t answering his phone. Turns out he’d fallen asleep on the ride home and hadn’t been noticed by the bus driver. What’s more, his phone was dead. But in 30 minutes of not being able to reach him, Tate had been to psychological hell:

â€œYou didnâ€™t answer your phone!â€ I exclaimed indignantly when my errant child was finally in my car and I had hugged him hard. â€œItâ€™s dead,â€ he answered nonchalantly. â€œChill out, Mom. I just fell asleep. Itâ€™s no big deal.â€

â€œYour new bedtime is 7 p.m. until youâ€™re 40,â€ I declared through clenched teeth. â€œMaybe you donâ€™t need a phone. What good is it if it doesnâ€™t work in times like these?â€

Thatâ€™s why he has a cell phone, after all…. I wanted to be able to get in touch with them in case something went wrong, or in case they needed to tell me about a change in their transportation. I thought of the cell phones as safety nets: They made me feel better about sending them to middle school, especially across town.

Beware the unintended consequence! First, for the kids:

By giving them cell phones, I had inadvertently placed an expectation and a burden on my children that I did not experience until my 30s: that they could, and should, be reachable every moment of the day.

Because I had a childhood only a few miles away from where my own children are growing up comprised of long bike rides and walks, lost afternoons playing alone in my own backyard, and meandering home from the bus stop with friends without my mother pinging me, I should have realized that giving my children phones, I was ending that kind of independence for them.

And as for parents:

I realize now that I wanted them to be reachable at all times not simply for their safety, but for mine; I wanted reassurance in the form of a sort of digital umbilical cord. Maybe that was selfish and short-sighted.

The truth is, my children donâ€™t need to be reachable every moment â€“ even to me â€“ to be safe.

Please see my very recent post on the “Hum” device that allows parents to monitor where, when and how their kids are driving. That is just the next step in the idea of constant supervision of our kids.

Tate may feel selfish and short-sighted, but she shouldn’t be hard on herself. Our entire society is dedicated to telling us that our kids are never safe unsupervised. Not when driving, not when not walking, not when playing outside or sitting in a parked car. Never, ever, ever.

Which is true. But that doesn’t mean they are particularly unsafe, either. They’re safe, but not perfectly so, as children (and animals and everything else on earth) have ever been. We are trying to create a new world with us as Gods, where we can control everything from afar. 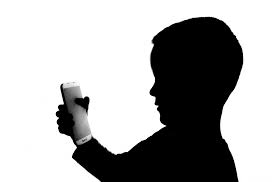 Hi Mommy! I just took a breath. Should I take anudder one?

Is My Toddler Ready for Organized Sports? Wise Advice from Tovah Klein
Is the New “Uber for Women” The Direction We’re Headed: Trust No Males Over 13?