November 13, 2015
.
This enbynkrznk
comes up a lot — the disconnect between the adventure in children’s books and the reality of kids’ lives today. The mom who wrote this (now edited down) post blogs at listentograce. She, her fighter pilot husband, and their tot Sean live in South Carolina.

Safety vs. Freedom, by Meredith

Last night I read A Pocketful of Cricket,Â by Rebecca Caudill, to Sean as a bedtime story. For the most part he tends to be more interested in watching my face than in looking at the pictures, because he’s a baby. But anyway:

A Pocketful of CricketÂ is a very sweet story about a little boy named Jay who finds a cricket on his way home from bringing in the cows. He makes it his friend, and ends up bringing it with him on his first day of school. In Jay’s pocket, Cricket starts fiddling, “Chee, chee,” and when Teacher realizes that Jay is the one with the cricket, she asks him to put it outside.

If he does that, says Jay, he won’t be able to find him again.Â “You could find another cricket, couldn’t you?” asked Teacher. Jay shook his head. “It wouldn’t be this one,” he said.

Teacher realizes that Cricket is not just any old cricket, he is Jay’s friend, so she asks Jay to bring Cricket up and talk about him for Show-and-Tell. 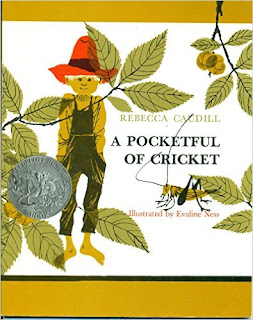 I remember myÂ mom reading A Pocketful of CricketÂ to my brother and sister and me, so of course there are special memories attached. But I couldn’t help thinking about several other things after we were through: Jay is six years old. In the story, it’s his job to walk down a lane, wade across a creek, walk through a cornfield, and climb over a rail fence into the cow pasture to bring home the cows every evening. The story also mentions that he can whittle, which means he has a pocket knife. He puts himself to bed at night. On his first day of school, he meets the bus by himself at the mailbox at the end of the road. When he gets to school, the driver tells him where to go. He introduces himself to the teacher.

And he’s six years old. Given the media and CPS frenzy that ensued when a tenÂ year old and his six year old sister walked home from the park, I wondered if anyone who freaks out at the idea has ever read classic children’s books. Remember Henry Huggins and Beezus and Ramona? Those kids were out walking and riding their bicycles all over town. They were building clubhouses (with real hammers and nails and old boards!!) and earning money by having paper routes. One of my favorite series, by Elizabeth Enright, features the Melendy family. It’s set during World War II, and in the first book thirteen year old Mona, twelve year old Rush, and ten-and-a-half year old Randy individually traipse around New York City. When their six-year-old brother Oliver imitates them and goes by himself to the circus and gets lost, of course everyone panics a bit, but a policeman finds him and brings him home, none the worse for wear. There is no Child Protective Service investigation.

When I was growing up and scribbling stories in my notebooks, the elder members of my family would tease me for being morbid because so often my main characters were orphans. What I’ve realized now is that it wasn’t morbidity, but rather the only way I could think of for allowing the children to be independent enough to go out and have adventures.

I also want to slay that part of me that prizes my own peace-of-mind above my son’s actualÂ well being. Most things worth doing carry elements of challenge or risk. I want to be able to let go. Watch out, world! Sean is coming! Â

Little Women, Louisa May Alcott, and A Chapter on Helicopter Parents
The Idea of “Safe Spaces” on Campus

45 Responses to Mommy, Why Do the Kids in this Picture Book Get to Walk Around on their Own?