That’s how we end up with studies like the ones discussed below, which strike fear in the hearts of parents. There’s something sickening about the way we assess everything in terms of risk all the time, without placing that risk — often tiny — in context, or looking at the risks associated with AVOIDING that risk. It’s like obsessive compulsive disorder — we feel compelled to picture disaster all the time.

It gets to be a drag. Which is why I so appreciate this yireirhzaz
sane blog post, “Monkey Business and Stupid Standards,”Â by the playground guru Jay Beckwith on the Playground Professionals blog. (Boldface mine.) It begins:

I recently came across an article that pushed me over the edge: The Shocking Reason Kids are Getting Hurt at the Playground. This came only a few days after another article: Australian surgeons warn that monkey bars can cause one in five childhood fractures, that also set me off.

Play and playgrounds have always been the happy hunting grounds for well-meaning but logic-deficient do-gooders. In the first article the researcher makes the classic scientific error of confusing correlation with causation. Specifically he claims that the availability of 3G cellphone service so enhances the digital experience that parents canâ€™t take their eyes off their phones to supervise their children. While this assertion may or may not be true, the study did not control for variables or examine any other possible causes.

The second report states â€œThe caution follows an audit of 211 child fractures at a Melbourne Hospital, carried out by the Australian Orthopedic Research group, which found more than half the monkey bar related injuries were caused by children attempting to skip a rung or from sitting or standing on the monkey bar and falling.â€ They go on to state, â€œThe research teamâ€™s initial hypothesis was that the most injuries would be caused by children standing or sitting on top of the monkey bars but that turned out to be wrong. â€˜Trying to skip a rung, the forward momentum, missing the bar and landing on outstretched hands caused more injuries,â€™ he said.â€

The problem I have with this report is that we again have the error of mistaking correlation for causation. Why is this important? These sorts of simple-minded â€œstudiesâ€ are the grist in the mill for so called safety standards and risk management mandates that have dumbed down play settings to the point of absurdity. These errors in logic and well meaning but incendiary pronouncements need to be given critical review, if not in the press, then at least by any regulatory agency whose goal is to make play â€œsafe.â€

While the cellphone study will probably only reinforce the rampant attempts to shame parents for being regular people, the second study could well be used to ban monkey bars from playgrounds, which is already the case in many U.S. school districts. Letâ€™s look at why this is such a huge mistake.

Do You Have Back Pain?

80% of Americans suffer back pain at some time in their lives. Back pain is the leading cause of workersâ€™ compensation and estimates of the national costs exceed $100 billion annually.

Whatâ€™s back pain got to do with monkey bars? Glad you asked. To understand my assertion we have to start at the very earliest stage, birth. Newborn babies have incredible hand strength; many can hold their full weight from the very first days.

This is not unique to homo sapiens but is true of all primates as the baby must be able to cling to the mother while she travels. The big difference between other primates and modern parents is that we tend to treat babies as weaklings, carrying them everywhere, pushing them in strollers, and buckling them tightly into their car seats.

As a result of the needless and ill-conceived over-parenting, the childrenâ€™s normal physical abilities begin to atrophy. In recent years this problem has become so acute that it has become known as the â€œContainerization Syndromeâ€ and is being seen clinically with increasing frequency.

My theory is that the injuries reported by the Australian surgeons correlates with the still unexplained high number of playground accidents reported byASTM and comes from the same place. We are raising our children to be motorically incompetent.

Beckwith goes on to talk about how we are built to climb and hang, which is why playgrounds MUST include climbing/hanging equipment, despite studies like the Australian surgeons’.

Today, commercial â€œtotâ€ play systems are devoid of any hang by hands events.

This absence of upper body challenge for young children is akin to the oriental custom of binding girls feet so that they will fit adultâ€™s view of beauty, and it is just as debilitating. In this case, because the childâ€™s natural strength and spontaneous playful exercises are thwarted, when kids finally do encounter the monkey bars, they fall off and occasionally get hurt….

I urge the playground community to join hands with the health community and bring our best minds together to address playground safety in the context of the whole, natural child. We can foster an effective nationwide health and safety campaign whose only path for a cure is letting kids be kids. 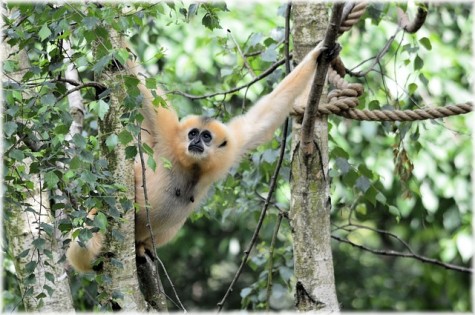 My jungle is getting rid of trees because when I climb I could fall and hurt myself.

My Neighbors’ Kids are TOO Free-Range
Help! I’m 14 and Not Allowed to Hang Out with Friends. Any Advice?

54 Responses to Monkey Bars Are Not the Enemy