Wanted to reach out quickly with an interesting snow storm related story idea: with kids stuck at home with a snow day, they are more likely to be on their smartphones/computers, increasing the chances of them cyberbullying someone or getting cyberbullied themselves….

If you’re interested, I have a client that launched the first anti-cyberbullying app today… 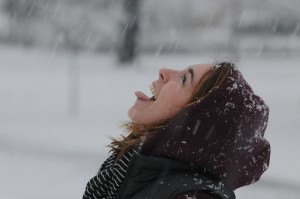 The Flakes of Doom.

What’s next? “Hi there. Hope you’re well. With all the snow, your children will be surrounded by white crystals, perhaps starting them on a tragic life of cocaine addiction….”

And if being inside is so dang dangerous, why not just send the kids out to PLAY IN THE SNOW? – L

One Mom’s Quest to Get Her Sons to do The Dishes
Kids Build Fort, City Finds it Not Up to Code