Readers, nrekkdffhn
I think we need some good news for this lovely summer weekend. So:

Dear Free-Range Kids: IÂ think the subject title says it all! Â Last year, I was despairing of a summer stuck to my son’s side because he wouldn’t leave our yard alone. Â This summer he has gone to 2 different parks within walking distance of our home… alone! Â  He came home after an hour of playing and told me that he felt “so grown up!” Â The smile of pride on his face was worth the wait!

While at the park, there was only a guy mowing a lawn, my son said.Â  That man asked him if his parents knew where he was.Â  My son said yes.Â  My son almost gave up and went home, but then a bus load of kids from a summer camp came, and he had fun.

Yes, hooray! And remember, you can always print out a free Free-Range Kids membership card that says, “I’m not lost. I’m a Free-Range Kid!” with space for your phone number, your signature and your child’s. Enjoy the summer!!!! 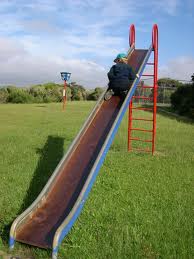 Kids! Come visit me! I am your summer and I’ want to play!

22 Responses to My 8 Year Old Went to the Park Alone!