No izikieasia
Child Left Alone: Getting the government out of parentingÂ is the seriously great title of a new (and first!) book by Â journalist Abby Schachter. It begins with this story:

Do you want to see government operating as if it can and should raise your kids for you? Try enrolling your child in state-licensed daycare. When our eldest daughter was 18 months old and started at the local preschool, the intrusion into our famiÂ­lyâ€™s decisions started almost immediately with strict rules about which foods I could send from home and how I should prepare and portion fruits and vegetables. My husband and I would joke by singing â€œPeel Me a Grapeâ€!

I used to inquire about the reasons behind each of these policies. The answer was always the same, whether it was an isÂ­sue of safety or hygiene, cleanliness or health: The state says so.

As the years passed, the rules piled up. No plastic bags. We had to provide multiple sippy cups because once a cup is profÂ­ferred it cannot be used again. Requirements for daily sunscreen slathering, and a state mandate that all uneaten food be thrown out lest anything become â€œhazardousâ€ over the course of the dayâ€”these are just a few of Pennsylvaniaâ€™s daycare decrees. We got used to all that. It was annoying but tolerable, until I had my fourth kid.

When my sonâ€™s caregiver inquired what she should know about him, I asked for exactly one thing: Please swaddle him for every nap. Swaddling means snugly or tightly wrapping baby in a blanket. It keeps them feeling safe and secure, and it is the only baby advice we followed. No can do, the daycare lady said apologetically. The state doesnâ€™t allow us to swaddle.

I was shocked. In the three years since my third child beÂ­gan daycare, Pennsylvania, along with several other states, had changed the regulations to include a ban on swaddling. The reaÂ­son is safety, because there have been cases of babies suffocatÂ­ing when covered by thick, loose blankets, and the overarching threat of SIDS. This is less common now that weâ€™re all taught to sleep babies on their backs, but it is still a danger, though there are no reported cases of babies suffocating due to loose blankets at daycare, certainly not in Pennsylvania (I checked). But I wasnâ€™t thinking about any of that when I learned about the new rules. As a mother, I want to do what works, and what worked for my other three kidsâ€”whether sleeping at daycare or at homeâ€”was wrapping them tightly in a blanket, like a burrito.

I demanded to know what I could do and was told that a doctorâ€™s waiver would allow the daycare workers to wrap my son. I eventually found a peÂ­diatrician who signed the waiver and became my instant hero. I was happier, my son slept more, and the daycare workers had an easier time caring for my baby.

After four kids youâ€™d think I would be used to this sort of bureaucratic intrusion into my personal decision-making. But more and more government-mandated parenting started getting under my skin.

Schachter started connecting with other parents who didn’t want the authorities — or busybodies calling the authorities — to micromanage their childrearing. The result is her book on why parents are not given the benefit of the doubt, and how to fight back. A good fight! 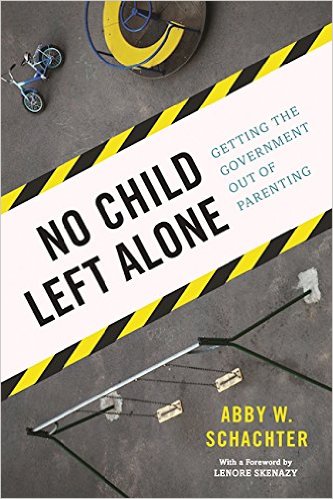 What happens when someone else gets to dictate how we raise our kids. (And look who wrote the forward!)Â

Halle Berry Reinforces Our Favorite Fear: Kids Are Snatched the Second Mom Looks Away
“Dogs Must Be Clothed” And Other Park Rules

48 Responses to My Daycare Refused to Swaddle My Son, Due to Regulations