What a thought-provoking video:

The ysfddibnya
ad shows several grandparents reminiscing about their childhood fun outside — tobogganing, planting, fishing — and then several parents recalling that they’d build forts, or just head out to find friends to play with. Finally, their kids talk about their love of videogames andÂ texting.

The ad then shows those same kids after what can only be called an intervention. We see them running outside (toward a waiting parent), carefully riding a bike on the sidewalk, or being taught by mom how to plant a flower. (That kid did not look psyched to me.)

It’s great that the ad has framed the issue we talk about here all the time: In just one generation, it has become almost bizarre to see kids heading out to find fun on their own outside. That’s why people call 911 when the see a child in the park. It’s like spotting a tapir escaped from the zoo. Kudos to Nature Valley for encouraging kids to get outside!

But as this note, uh, notes:

One of the things I noticed is that in the previous generations memories there were no adults present and the children created wonderful memories. In the current generation’s outdoor play portrayed in the video there were adults present in almost all of the depictions. It pretty much says that outdoor play is necessary but must be supervised and lead by an adult. — Marcie

Considering thatÂ even Sesame Street can no longer endorse its older, more Free-Ranging episodes — a video of highlights from its early years says, “These early â€˜Sesame Streetâ€™ episodes are intended for grown-ups, and may not suit the needs of todayâ€™s preschool child” — it’s not surprising that Nature Valley would have to do the same.

But beyond even the perceived need for supervision, the adults outside with their kids at the end of this ad seem almost as if they’re teaching a remedial class. And it is hard to have fun when it’s so…unnatural. No 9-year-old is going to come home from school and then burst outside again, bright-eyed and eager, for the chance to run 50 feet to his mom.

So what is the answer? Nature Valley and Free-Range Kids both want the same thing (well, we don’t care if we sell granola bars): A groundswell of kids outside, so that when one kid goes out, he or she is sure to soon find another to play with. And with the renormalization of kids running around, the threat of CPS intervention disappears.

Not that I think time spent on videogames or texting is all wasted. I don’t. I certainly spend most of my time online. Just that it’s great for kids to also have time that is out in the world, on their own, creating, running, smelling, climbing, organizing…

To that end, perhaps yesterday’s post holds the key. The way to get kids outside is to appeal not to nostalgia but to the desire to make sure our kids succeed. As Mariana Brussoni, the author of a study on the importance of “risky”play, said:

With parents, I can tell them thereâ€™s a one-in-14-million-chance that their kids will get kidnapped. I can tell them their kids are more likely to get hit in a car than out of it, and it has very little impact. What influences parents is the research showing how a lack of ability to take risks affects their childâ€™s development, health and well-being.

Unsupervised play is the key. Parents have to realize it is the super-vitamin kids need. And kids need to see that the outdoors is their…videogame, another world they can escape to — with or without a granola bar in their pocket. Any further suggestions as to how to make this happen are most welcome! – L. 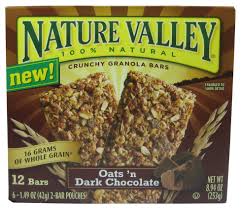 Kudos to Nature Valley for trying to get kids back outside.

73 Responses to Nature Valley’s “Get Kids Outside” Ad