If you’re wondering why our country seems so bizarrely fearful, here’s the answer: We absolutely cannot understand that risk is inherent in everything, even things that are outrageously safe, like eating cookie dough.

Recently, thanks to an off-batch of General Mills flour that sickened 42 people nationwide (none of whom died), the Food & Drug Administration and the Centers for Disease Control have warned us, yet again, not to eat raw cookie dough. They did not just say, “Get rid of that General Mills flour.” They said, basically: Don’t eat raw dough, because dough contains raw flour, flour comes from the fields, fields are not antiseptic, and therefore you could end up very sick.

Even though Â you, most likely, you can eat all the raw cookie dough you like and be fine — Â unless it’s the tainted, one-off General Mills batch, that has been recalled. Here’s a wonderful column about what she calls “Cookie aezffkzzfz
Dough Abstinence” by L.V. Anderson in Slate. She writes:

[A] closer look at the reasons behind the FDAâ€™s recommendations reveals that they might, just maybe, be exaggerating the risks of cookie dough. The FDA issued the warning after investigating an outbreak of a virulent strain of E. coli linked to a batch of flour produced in a General Mills facility in Kansas City, Missouri. (The affected flour, which has since been recalled, is sold under the brand names Gold Medal, Signature Kitchenâ€™s, and Gold Medal Wondra.) Forty-two people in 21 states have contracted the flour-linked E. coli since December. No one has died. And yet the FDAâ€™s response is to tell everyoneâ€”all 319 million Americansâ€”not to eat any uncooked flour whatsoever.

Why is the government acting act as if flour, a staple of human life since the dawn of agriculture, is anthrax?

We live this way and it’s making us crazy.

One child dies of “dry drowning” — an extremely rare condition where water in the lungs of a child who went swimming kills them even a day or two later — and suddenly there are stories all over the media about dry drowning “warning signs,” and how to be more vigilant.

One child is accidentally served an alcoholic drink at Applebee’s and suddenly the chain vows never to serve anything other than individualÂ juice packs. As if it had been serving kids Mai Tais on a regular basis.

One zipper-pull falls of a children’s sweatshirt, and suddenly 140,000 of them have to be recalled — because the zipper pull COULD pose a choking hazard. Not that it did. And not that the pulls even fell off the other shirts. But one case is seen as a meteor hurtling toward the earth.

This is not a safe or smart way to live. It throws out products and practices that are perfectly fine. It mandates new products and practices that are unnecessary and often expensive, in terms of time or money. I just got an email from some playground surfacing company begging me to run a piece about the dangers of modern day playgrounds and how they must be made even safer. What will that cost? How many playgrounds will be closed because new standards make the old ones (even those covered in squishy surfacing) legally untenable? Who wins when extremely safe is not safe enough?

These are the questions that drive many an American to one thing only: A heaping spoonful of soul-salving cookie dough.Â – L. . 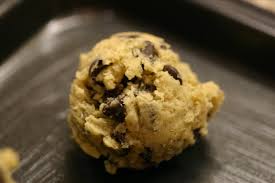 Tempt me not, o sweet spawn of Satan!Â