Hi Folks! My “I nnnirtzryk
Won’t Supervise Your Kids” class begins today (Weds., Sept. 12) at 3:45 in Central Park. We’ll meet at 85th and Fifth Avenue. Any parents present will sign a waiver, “I don’t expect anyone — much less Lenore — to supervise my kids.”

And then they leave, and so do I, and the  fun begins.

Make up a game! Learn something new. Make new friends. You know — do the kind of stuff  parents got to do when THEY were kids, before everyone got so scared for kids every time they leave the house! (A misplaced fear since, I must point out again, crime is DOWN since the 70s and 80s, when most of today’s parents were allowed to play outside.)

Yes, the fee is $350 for 8 weeks. Yes, you can come and not pay a penny. Scholarships available for the asking. The more kids the merrier. How merry? Ask your parents! Chances are when they think back on their happiest childhood memories, the first thing that springs to mind is not Kumon.

Any kids reading this might also tell their folks that “free-play” (or what grownups used to just call “play”) is not a waste of time.  It may look that way because “it’s not ‘goal directed,’ and parents are,” points out Hara Marano, author of A Nation of Wimps. But in fact, “Play builds brains.” It’s nature’s supervitamin, since it builds confidence, problem-solving, health and joy, too! And maturity!

Maturity? Well, as I once wrote about play on PBS.org:

Think about a group of kids that gets together and has to come up with something to do. At the very least, this demands creativity: they have to create a game. So they do—say, “Toy Baseball.” Then they have to agree on how it’s played: they will use a plastic dinosaur as their bat. That just involved communication, and—probably—compromise (if one kid wanted to use Barbie as the bat instead).

Now think about a boy who strikes out and wails, “One more pitch!”

“No!” yell the other kids. “It’s not your turn anymore!” And with that, the boy has a choice: he can throw a tantrum and run off, or he can suck it up. Usually a kid wants to play more than anything, so suck it up he does, and heads to the outfield. And with that he has just learned, literally, how to play by the rules.

Play is dress rehearsal for adulthood, and, before that, for school. Think how many times a teacher has to say, “Wait your turn!” to get a kid to stop blurting out in class. At play, kids get endless practice waiting their turn. Self-control gradually becomes second nature. Schools that cut short recess think they’re adding “education time.” But play is education time.

As parents, we want to give our kids the best and lately that has meant putting them in after-school classes we hope will enhance their lives. And yet, take a look at this study!

Youngsters who are allowed to leave the house without an adult are more active and enjoy a richer social life than those who are constantly supervised, according to a study conducted at UCL.

Maybe “I Won’t Supervise Your Kids” is the most enriching after-school class out there! So come! — L. 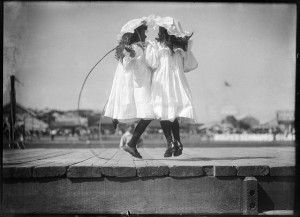 Unsupervised play used to be what everyone just called “fun” — not “crazy.”

free play, get kids outside, i won't supervise your kids, recess, Take Our Children to the Park, unsupervised play

Help Needed: Can Kids Walk to School Alone in First Grade?
NEEDED: New York-Area Free-Range Parents Who Can Be on TV Tomorrow Morning

17 Responses to NYC Kids! Come to Central Park This Afternoon!