June 16, 2016
.
There eintsyifaf
has been an outpouring of online sympathy for the parents ofÂ the boy who was killed by an alligator at a Disney resort in Orlando, which just goes to show that sometimes the internet has a heart, and sometimes it calls forÂ blood.
.
The question is why.
Â .
In contrast with the half a million people who signed a petition against Michelle Gregg, the mom whose 3-year-old son got into the gorilla exhibit at the Cincinnati Zoo, leading zookeepers to killÂ 400-pound Harambe, commenters have not gone insane over the fact that officials have already “put down” four Disney-area alligators, without being positive which of them, if any, dragged 2-year-old Lane Graves to his death.
Â .
If you can believe it, even CNN managed to keep some semblance of sanity, running a chart showing that cows, Â dogs and even venomous spiders kill more humans than alligators do.
Â .
It was with relief that I found far more comments castigating those who would blame the gator parents than actual parental castigation. It’s like the high road was the cool place to be, this time. Â “…its ridiculous to blame the parents who were sitting a few feet away and did all they could to save him,” read a typical online comment. And, on Twitter, “Pray for his family. Dont judge.” Â “The parents in #DisneyGatorAttack don’t need your harsh commentary during this awful event.” “People without children are so quick to blame the parents when in fact this attack could have happened to anyone.”
.
Compare to: “#GorillaIncident MOM IS TOTALLY AT FAULT SHOOT HER”
Â .
So, what accounts for the vast difference in response to these two incredibly rare toddler/animal tragedies that took place at family-friendly places?
.
Well first of all, of course, the 2-year-old died. There’s no way to say that the Graves haven’t suffered enough. Â (And what an eerily sad last name.) Also, even as the story broke, we heard that the father desperately tried to open the alligator’s jaws and couldn’t. That is a horrifying image, and no one with a heart or head would dare accuse that dad of not doing enough.
.
Then, too, there’s the question of racism — although I think many people were jumping on the Cincinnati mom before they knew she wasÂ African-American. Â Graves was white.
Â .
And there’s even the question of species-ism: Gorillas look like us. Alligators don’t. It’s easier to empathize with a primate.
Â .
But even more than all that, I think that so many people were eager to flog the Cincinnati mom because the mob needed someone to blame (that’s what mobs do), Â and moms are a favorite target these days.
.
This is the era when we have come to believe Â that mothers can and must be in control of their kids at all times. Any mom who takes her eyes off her kids — and we hear about it — is automatically a public enemy. (Think of all those moms berated for letting their kids wait in the car a few minutes, or play at the park unsupervised.) And if anything bad happens to an unsupervised kid, it’s the mom’s fault. So Michelle Gregg got the public’s wrath, while the zookeepers, zoo designers, zoo guards, and fate, God’s will, etc., etc., did not.
Â .
But this time, with the alligator incident, the mob seems to be aiming not at the mom, but Disney. “I say the Grand Floridian is responsible for not having signs posted about the gators!! What parent would ever think that Disney would allow kids or anyone to be in an unsafe area,” read one typical comment. Many others echoed the sentiment that Disney should have put “GATOR!” signs in the area, rather than just, as reported, “No swimming.”
.
The similarity here is that if there’s any entity we love to blame more than moms, it’s corporate America. So if we truly believe a mom should be been thinking, “Well, I know this has never happened once in 38 years of the gorilla exhibit, but what if today my kid tries to get in — and does? I better be preparing for that!” then we are also quite capable of thinking, “Well, just because we are one of the most popular tourist destinations in the world and not once has a guest ever been killed by an alligator, nonetheless we should be constantly warning vacationers about that gruesome possibility.”
Â .
In both cases, the crowd has found someone it can second-guess after a once-in-a-generation (or two) tragedy. That way it doesn’t have to contemplate the unpredictability of life, or the fact that there is no such thing as perfect safety, or perfect parents. Â It can simply sit back and blame.
Â .
America’s favorite coping device. – L
Â . 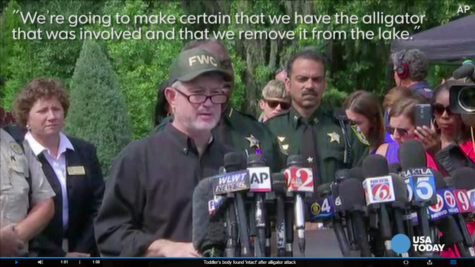 Can My Ex-Wife Prevent Me From Letting Our 9-year-old Walk to School?
“16 is the Appropriate Age to Allow Children to Be Outside by Themselves” — New Albany, Ohio, Police Chief

95 Responses to Of Alligators, Gorillas, Tragedy and Blame